Visiting Museum of London with kids 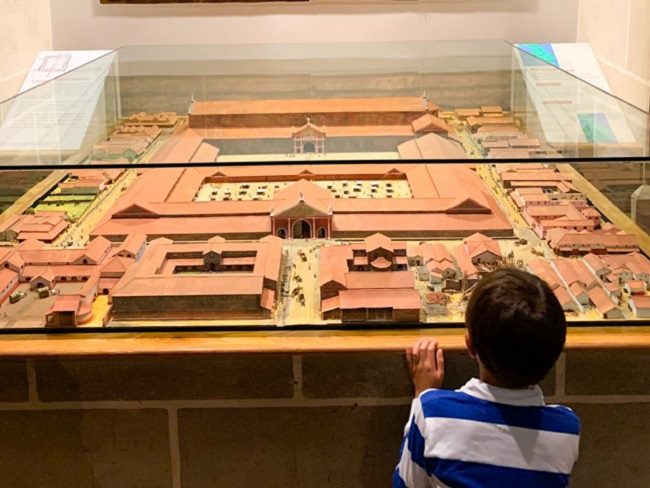 Museum of London is located in the City, close to the Barbican Centre and a short walk away from St. Paul’s Cathedral. One of many free museums in London, Museum of London documents the history of London, from prehistoric to modern times, offering the largest urban history collection in the world with more than six million objects. In this post, I’ll share more about visiting the Museum of London with kids. 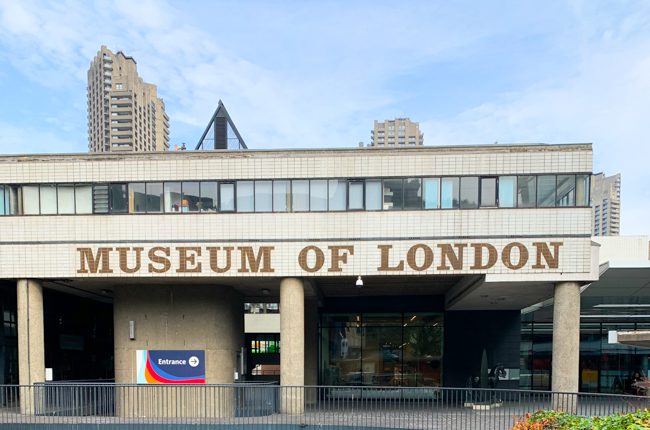 Museum of London is a fascinating museum to visit and great for children, with interactive displays and exhibits to explore, from measuring weights in the Roman London gallery to moving London’s iconic transport vehicles around a track in the People’s City gallery. Visiting the Museum of London is also one of the top things to do in the City of London with kids. Plan a full day out in the Square Mile by combining the museum visit with other nearby stops, such as the Sky Garden or Barbican Conservatory. 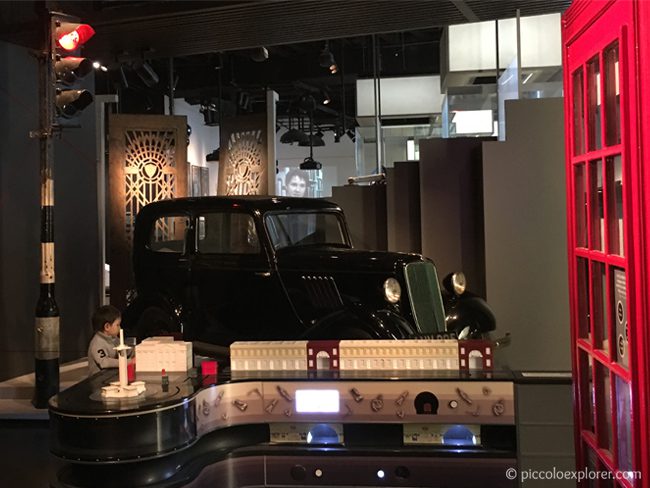 The first gallery you see when you enter the museum is London Before London, which explores the lives of the people living in the Lower Thames Valley from around 450,000 BC until the creation of the Roman city of Londinium. Exhibits display evidence found around the city which show that big beasts once roamed London, including rhinos, mammoths and hippos. 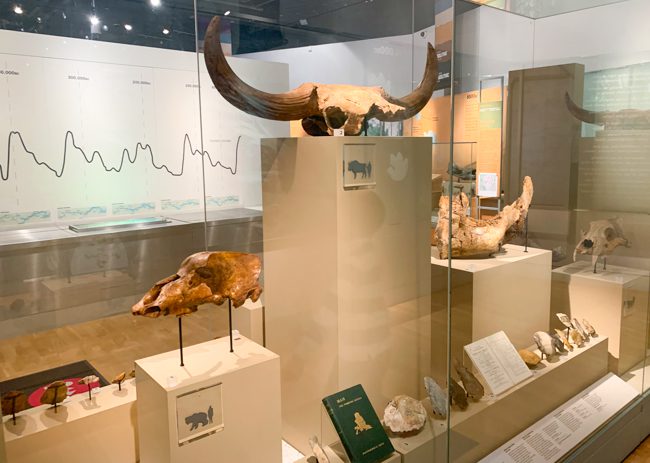 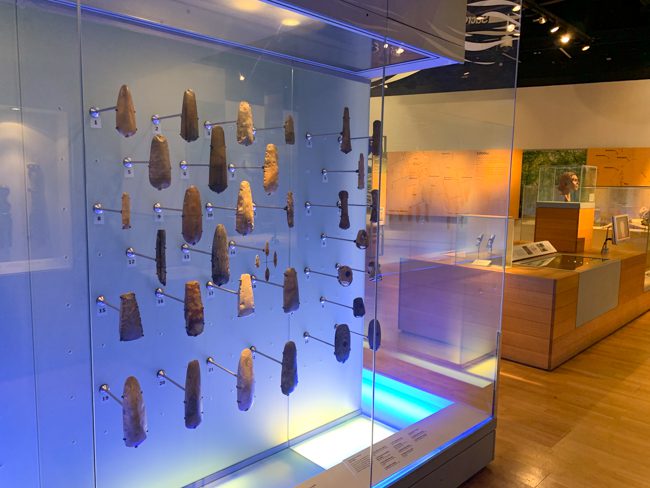 The museum’s Roman London gallery offers a fascinating look into what daily life was like in the city, called Londinium, 2000 years ago. The Romans built the city where London now stands, bridging the Thames and founding Londinium in AD 47. 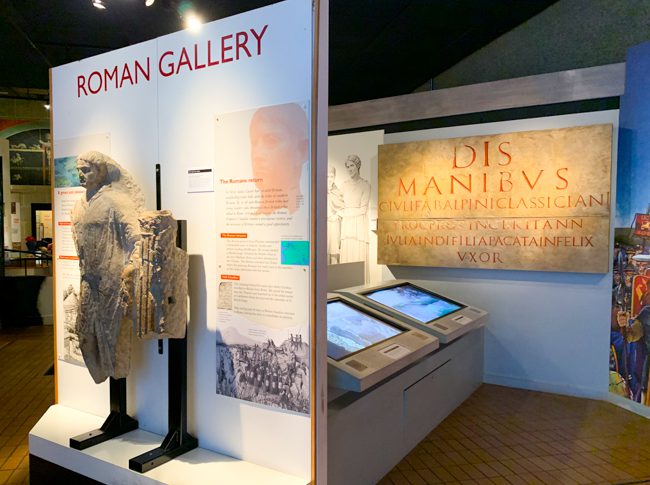 Interesting fact: From around AD 50 to 410, Londinium was the largest city in Britannia and a vital international port. 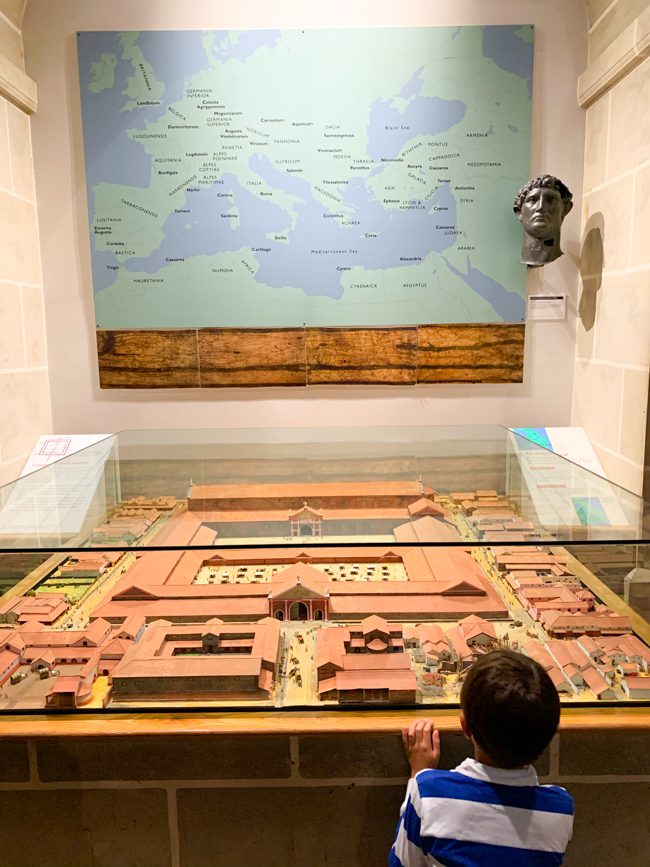 The Museum of London’s Roman collection includes over 47,000 objects, mostly recovered during building operations in the City of London and Southwark.

Below is a replica of a portable stall for selling knives and other small cutting tools. Apart from the bundles of replica knives and the wooden handles, the knives and tools are original and came from Roman London. 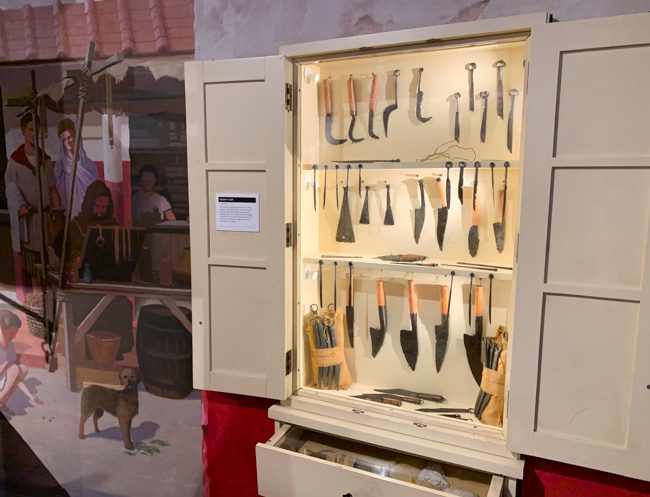 The objects in the collection reflect how the people of Londinium worked, worshiped, relaxed and played. Part of the gallery offers a look into a typical home at the time. The mosaic below is called Bucklersbury Mosaic, dated AD 250, and was discovered in Queen Victoria Street in 1869. 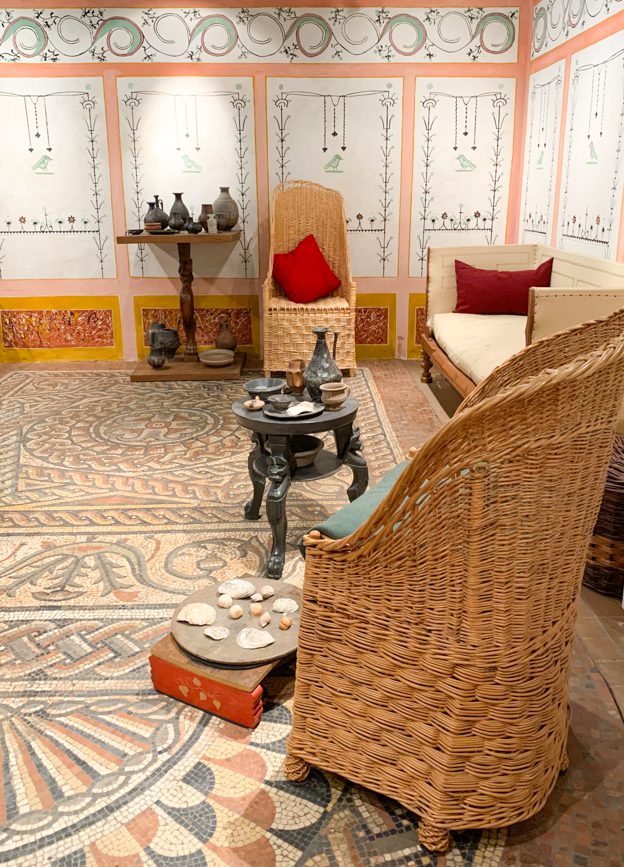 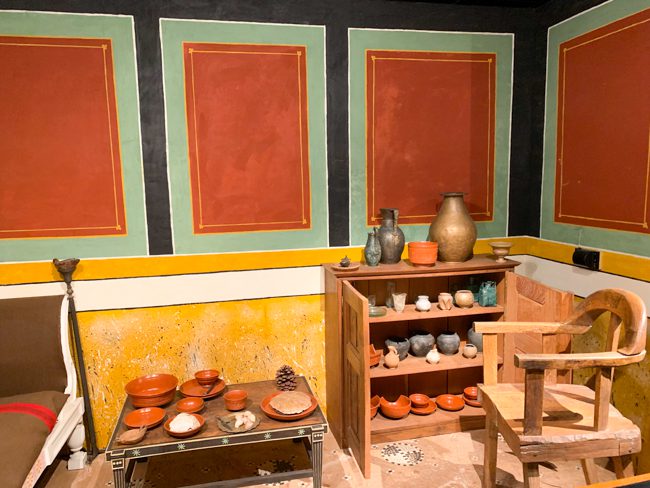 Fragments of the Roman London Wall can be seen just outside the Museum of London. This is the view of what remains of London’s city wall, a mix of Roman, medieval and Victorian building. 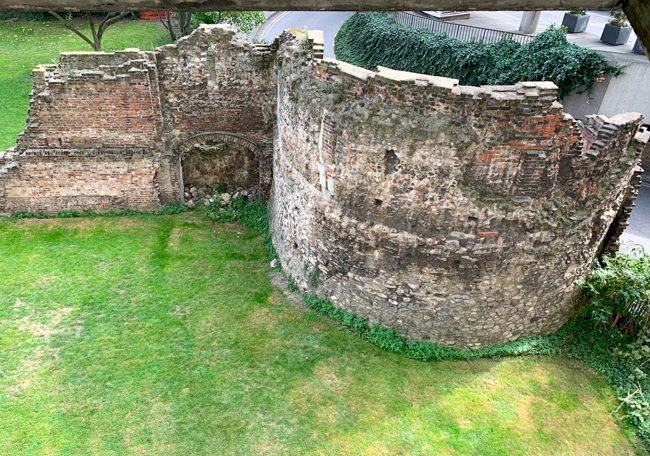 When you exit the museum heading towards Barbican Centre, you have a view of the other side of the wall fragment. 2000 years ago, this was a fort guarding the edge of the city. 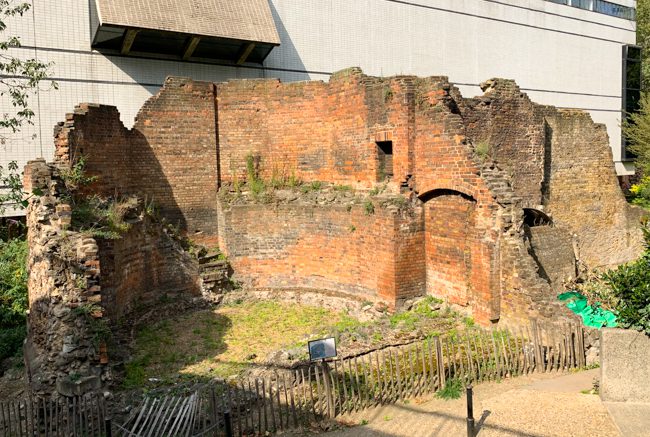 The next gallery takes you from the collapse of the Roman city to the accession of Queen Elizabeth I. During this period of time, London grew to become one of the wealthiest and most important cities in Europe. 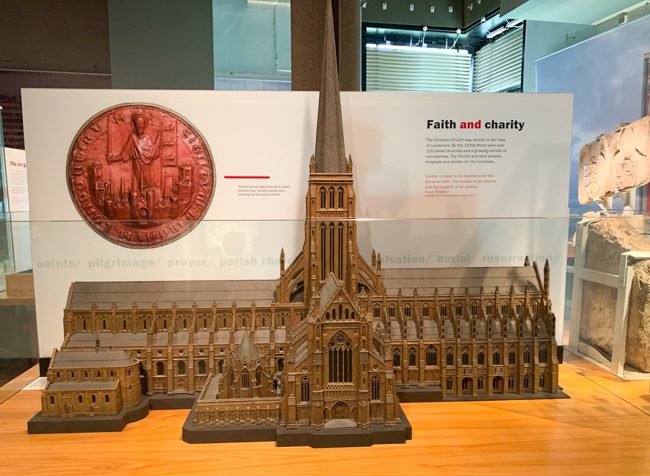 There is a reconstruction of a typical house in this gallery (not shown) that shows what everyday life was like in the late Saxon town of Lundenburg. 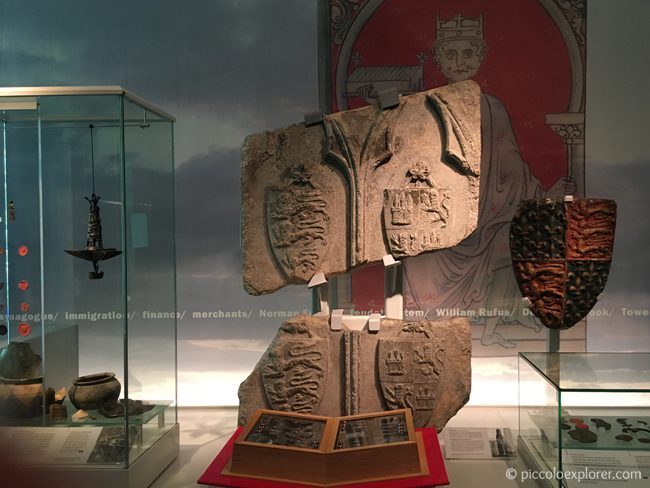 Interesting fact: London Bridge was fortified to stop Viking raiders from sailing up the Thames

One of the most turbulent periods in London’s history, the city experienced the execution of King Charles I in 1649, the plague in 1665 and the Great Fire of 1666.

Below is part of a fire engine, a barrel on wheels with a central pump, that was built in 1678 following the Great Fire of London. 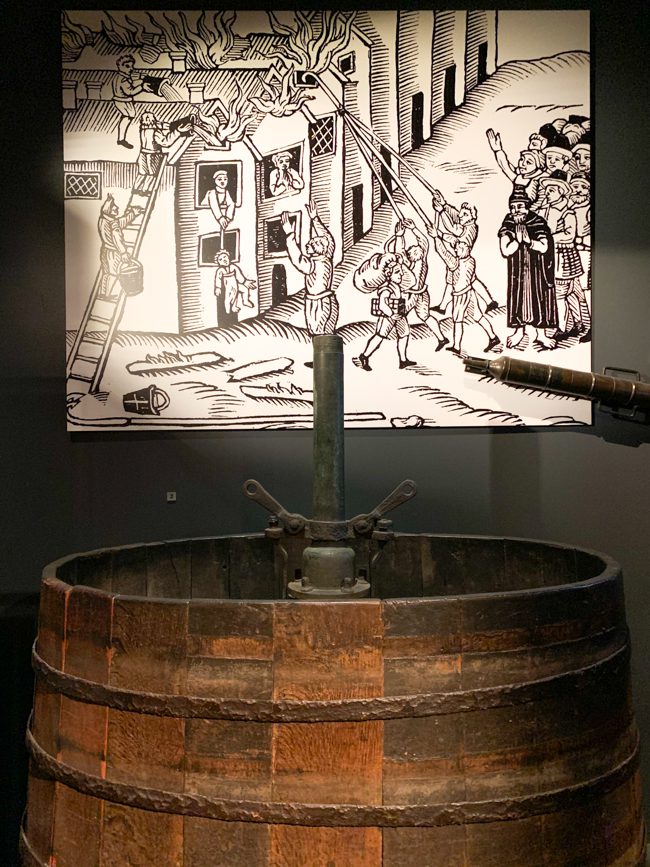 There are some amazing paintings within this gallery depicting the Great Fire. In this gallery, kids can try on a replica of a 17th century helmet worn by firefighters and compare it with a modern helmet from the London Fire Brigade. 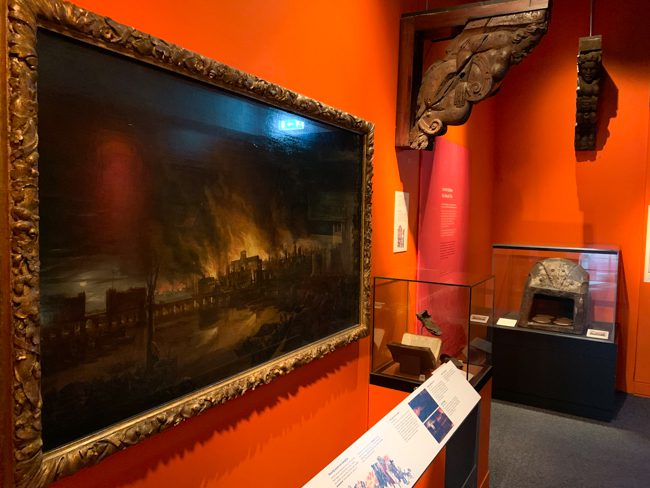 On display is a model (with a cutaway model on the other side) of the Rose Playhouse, built in 1587 in Southwark, which saw first performances of Marlowe’s Doctor Faustus and Shakespeare’s Titus Andronicus. 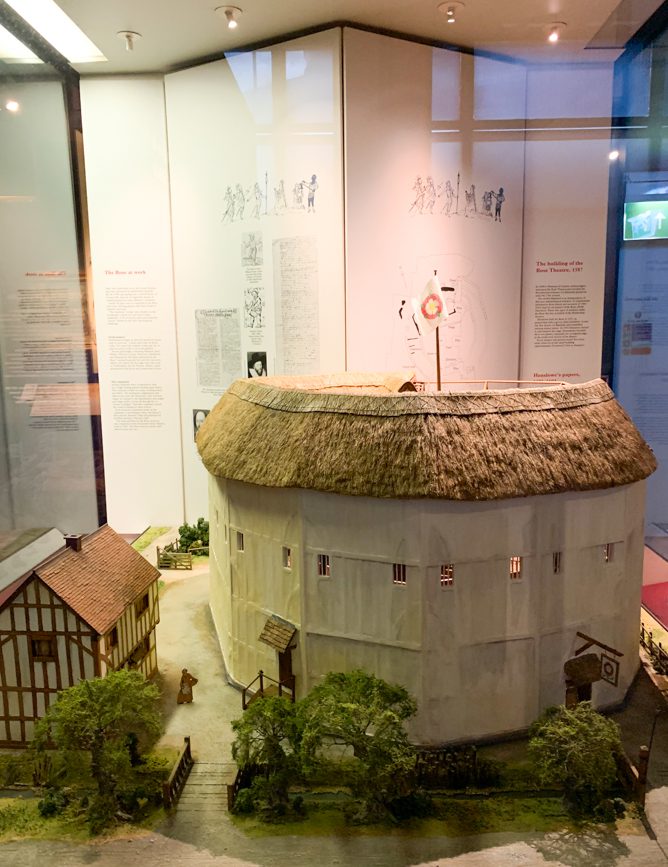 In this gallery, the exhibits offer a look into the many artefacts, dollhouses and stunning gowns, as well as everyday objects recovered in excavations (shown below). 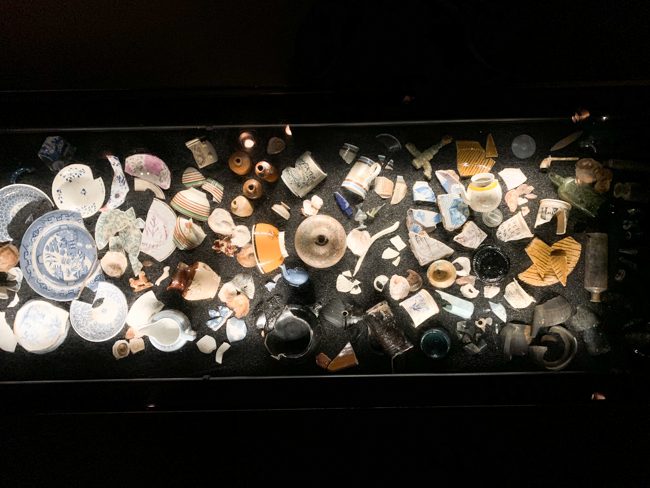 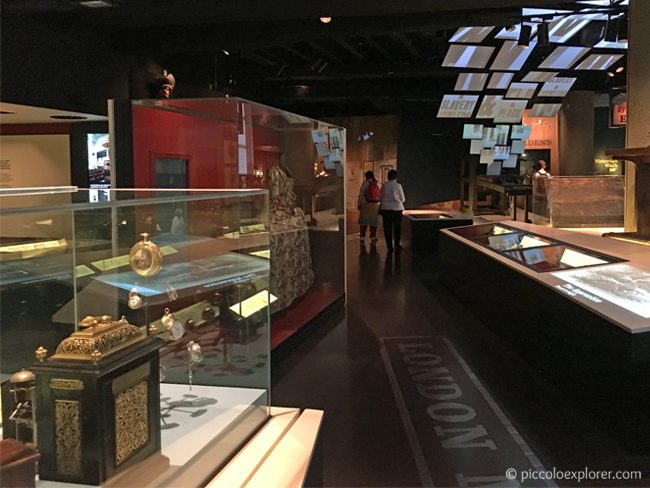 There is also a recreation of Vauxhall Pleasure Gardens, with beautiful fashion displayed.

My favourite part of the museum is the Victorian walk, where you can experience wandering along the winding streets of 19th century London. Kids will enjoy seeing the typical toys and games during the time at the toy shop window and the lovely details in each of the shopfronts. 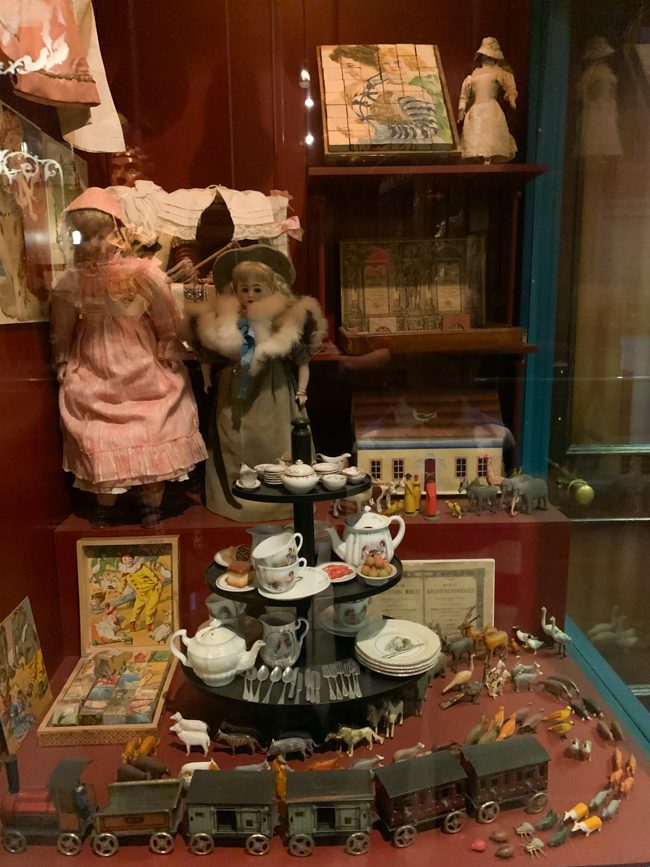 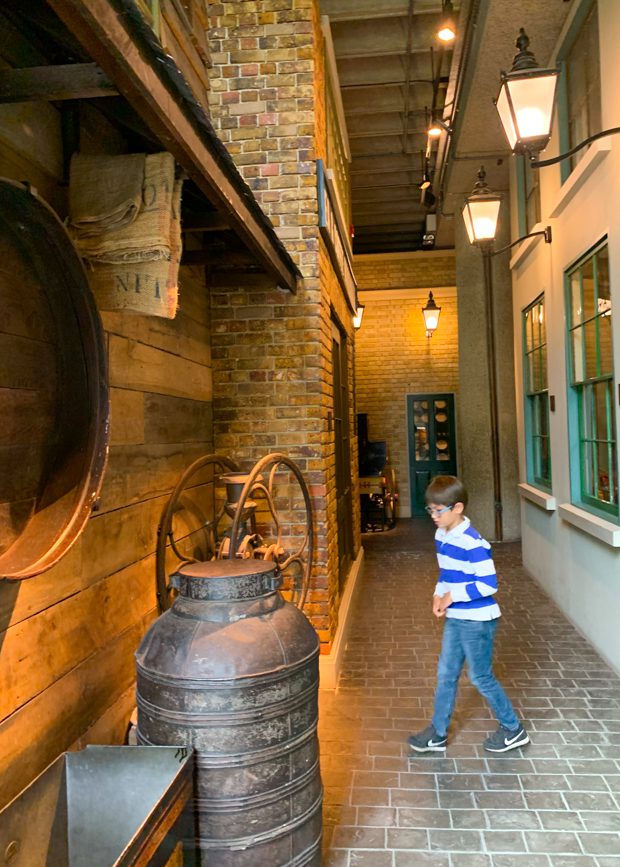 The Victorian Walk features a dozen street trades, including a barber, baker, tobacconist, tailor and pawnbroker. 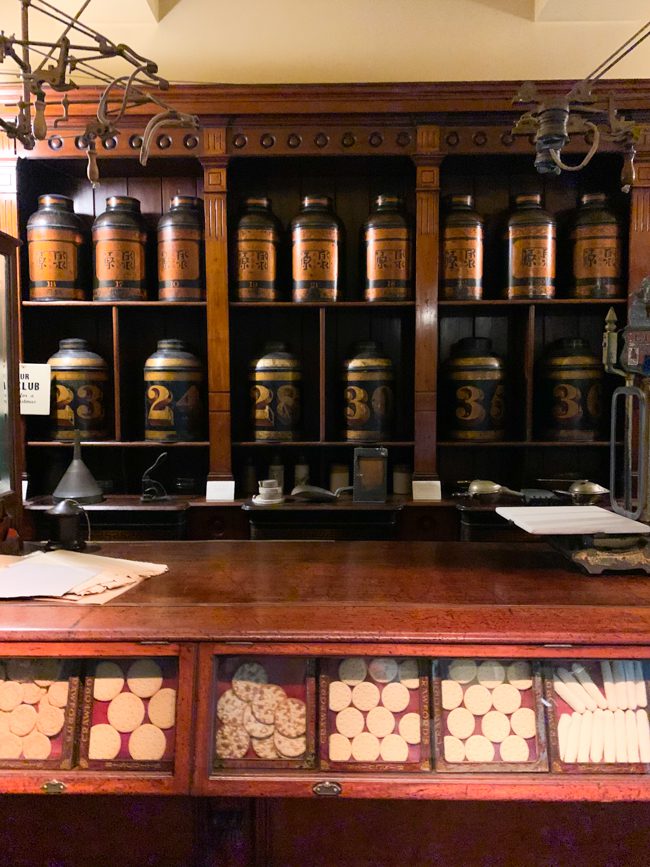 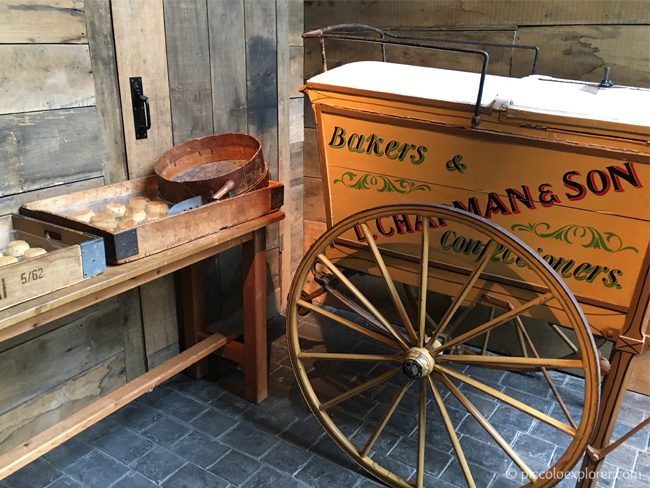 Another highlight was seeing London’s first motor vehicles, such as this taxi from 1908, that would eventually replace the city’s horse-drawn taxis, buses and carts. 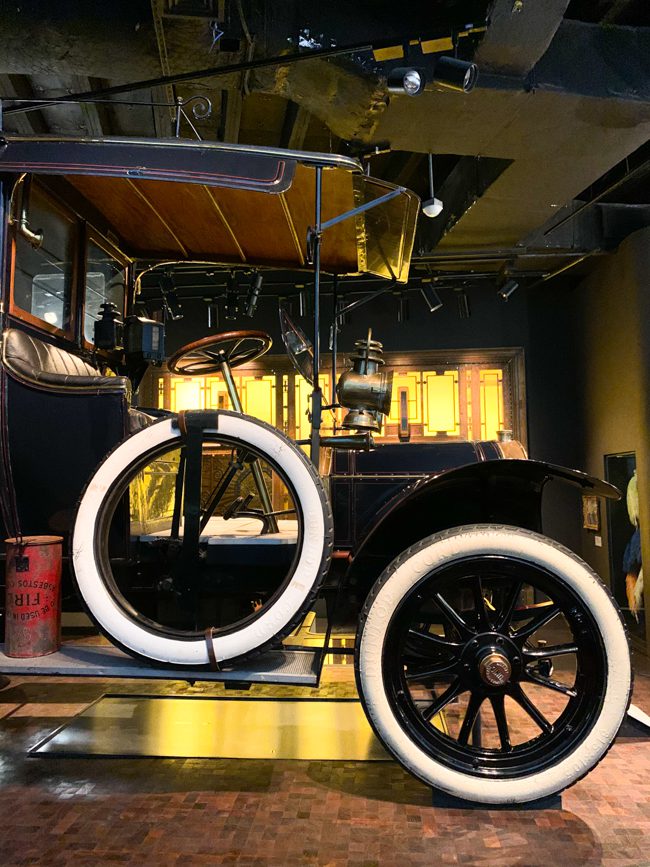 A good place to take a break from exploring here is at this interactive table for children to move buses, cars and trams along the streets of London. 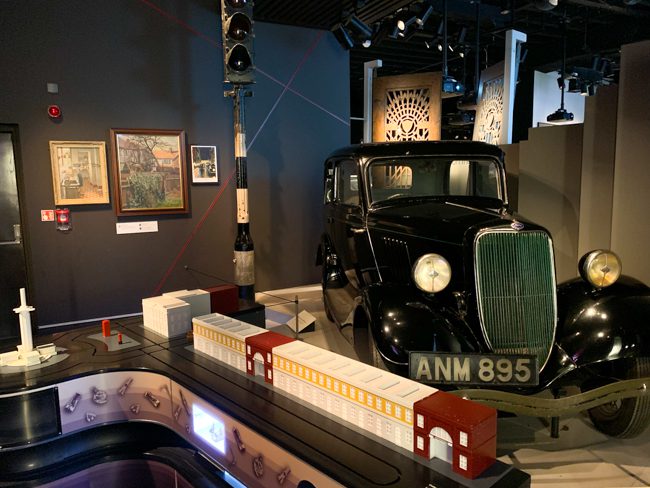 The final permanent gallery covered the post-war generation – with revolutions in technology, fashion and culture that would transform London.

This iconic sculpture created by Heatherwick Studio is on display here, with footage showing how the cauldron was made and its role in the opening and closing ceremonies. It’s amazing to see up close!

The museum regularly runs special events, including family activities over the weekends and the school holidays. For the 2021 festive season, there will be the chance to meet Santa in his grotto along the Victorian Walk. Tickets are £12.50 per child (includes a gift) and there is availability to book a time slot for the Father Christmas experience on the Museum of London website.

For more ideas of things to do this festive season, read our regularly updated post on Christmas events for kids in London.

Visiting the Museum of London with kids makes for a fascinating morning or afternoon out learning about the history of London. The Museum of London is one of the top free museums in London to visit, with an extraordinary collection of more than six million objects from prehistoric to modern times. Kids will enjoy learning about the prehistoric beasts that once roamed London, see what life was like during Roman times, have a look at a typical Saxon house, see exhibits about the Great Fire of 1666, experience walking along a Victorian street and much more during their visit.

While there are a number of interactive exhibits and displays which may still be closed when the museum reopens in May, there is plenty to see for about a 1.5 – 2 hour visit. I’d recommend tying in the visit with another stop in the City, such as the Barbican Conservatory or Sky Garden.

Opening Hours: Open Wednesdays to Sundays, 10am to 5pm

Tickets: Free admission to museum. Advance booking is not a requirement and there will be a number of walk-up tickets available on the door on the day (updated November 2021)

PIN FOR LATER – Museum of London with Kids 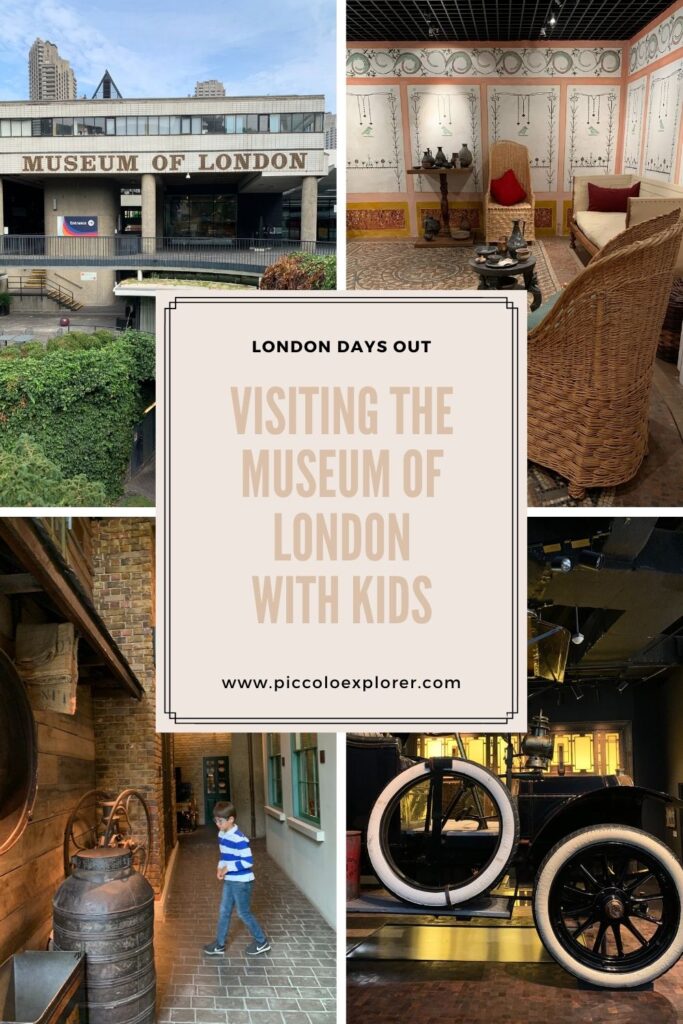 London Days Out Museum of London 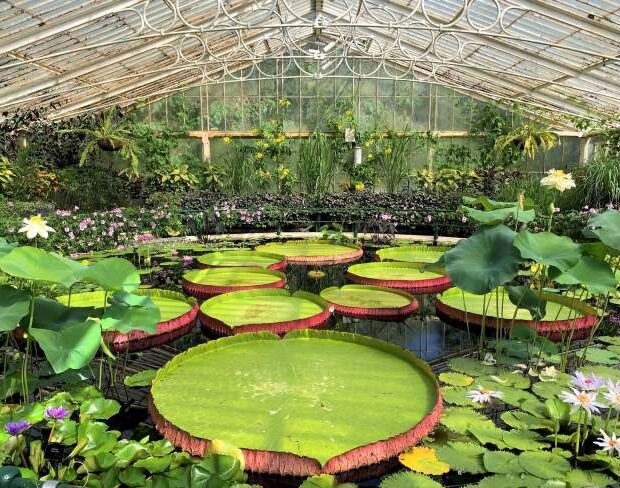 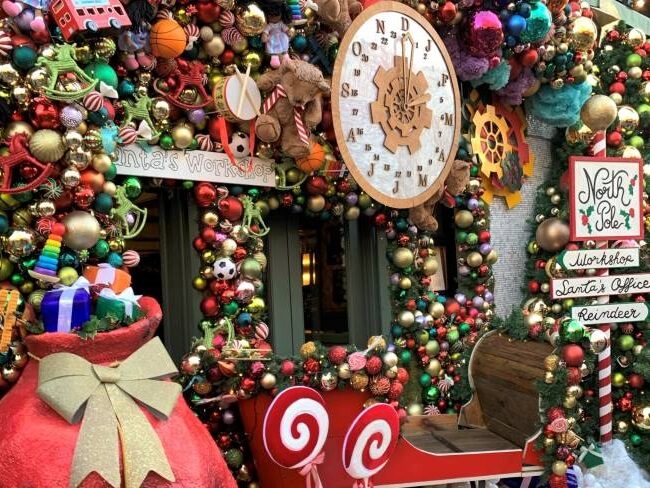 Christmas in London with Kids 2021 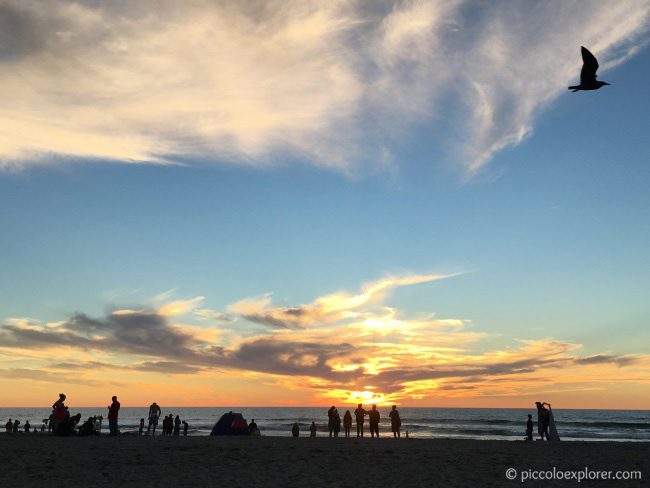 Family Adventures and Travels in 2015