A Morning at Windsor Castle

Windsor is an easy half an hour drive away from where I live in West London (Chiswick), so when the forecast promised a day in late March with slightly warmer weather and some sunshine, I planned a morning out to bring Little T to tour Windsor Castle. It was a breeze to plan, thanks to all the information the Royal Collection Trust and local borough have on their websites. I purchased my ticket in advance, so I could pick it up at the entrance, and once we were in the car, I set up the sat nav for the parking lot I chose online (based on proximity to the castle entrance) and off we went.

As is usually the case, Little T dozed off about five minutes before we reached our destination, so since we weren’t in any hurry and having a well-rested toddler was beneficial for our trip, I spent about half an hour taking in the parking lot surroundings while I waited for him to wake up. Note to self: always bring a book just in case. Especially when you forget to bring the cable to charge the phone in the car and have to avoid using it unless absolutely necessary.

Little T has good timing, because he woke up from his catnap and was in his stroller just in time for us to make it in front of Windsor Castle to watch the beginning of the changing of the guards ceremony. He perked up at the sound of the band making their way down the street and was enthralled watching the guards march past us in perfect unison. 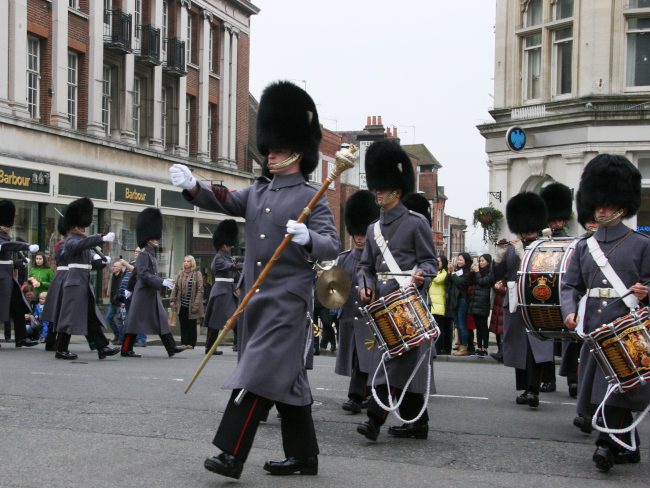 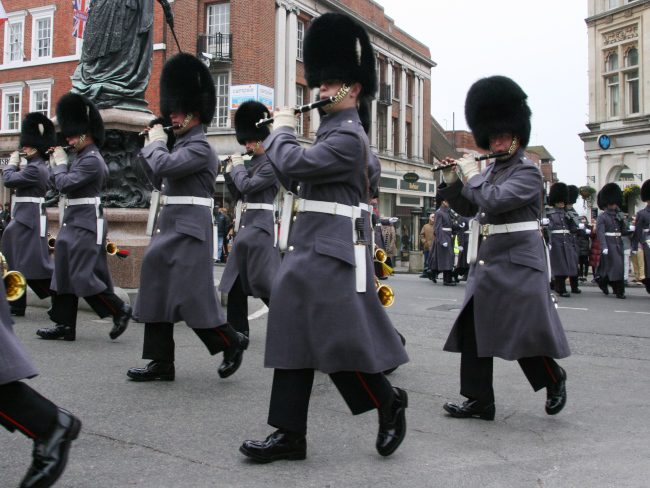 It all happened within a few minutes and while the ceremony continued inside the castle gates, we went to the entrance to pick up the ticket and souvenir guide I purchased in advance – again well worth it since I went straight to the front of the queue. Once we passed through a quick security check, we made our way into the castle grounds… 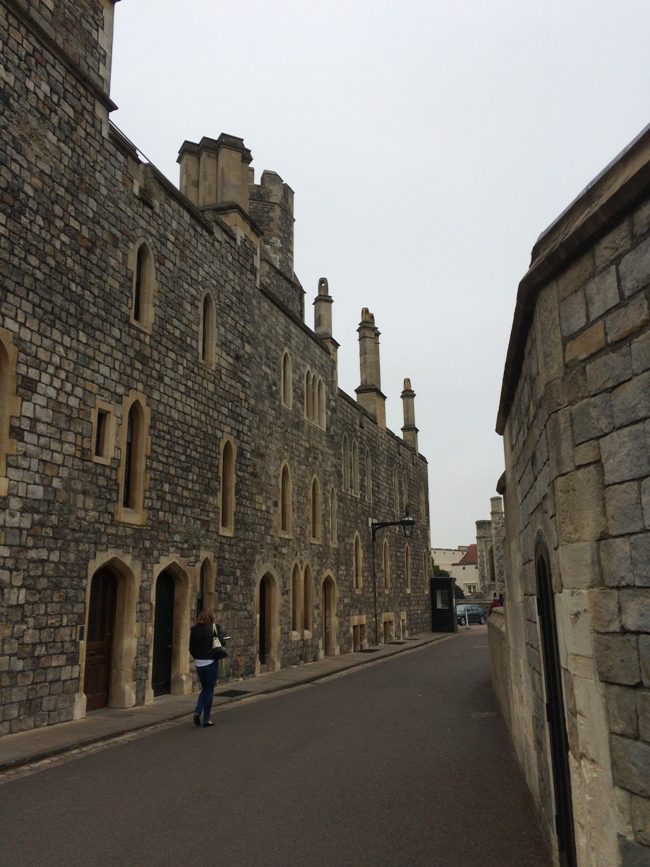 First, peering over the wall to admire the tranquil garden that sits at the foot of the Round Tower… 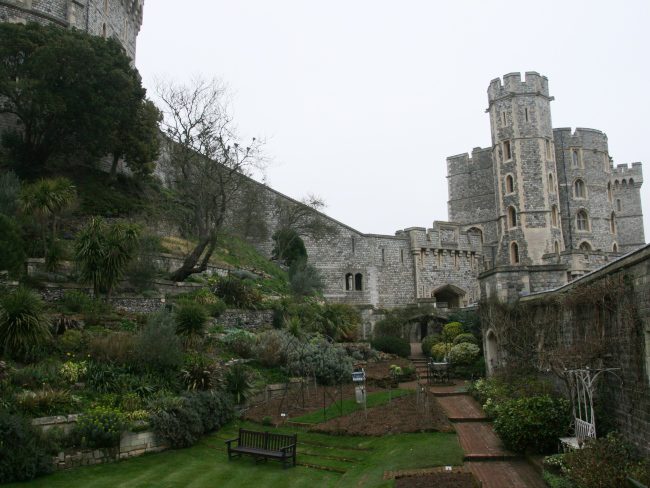 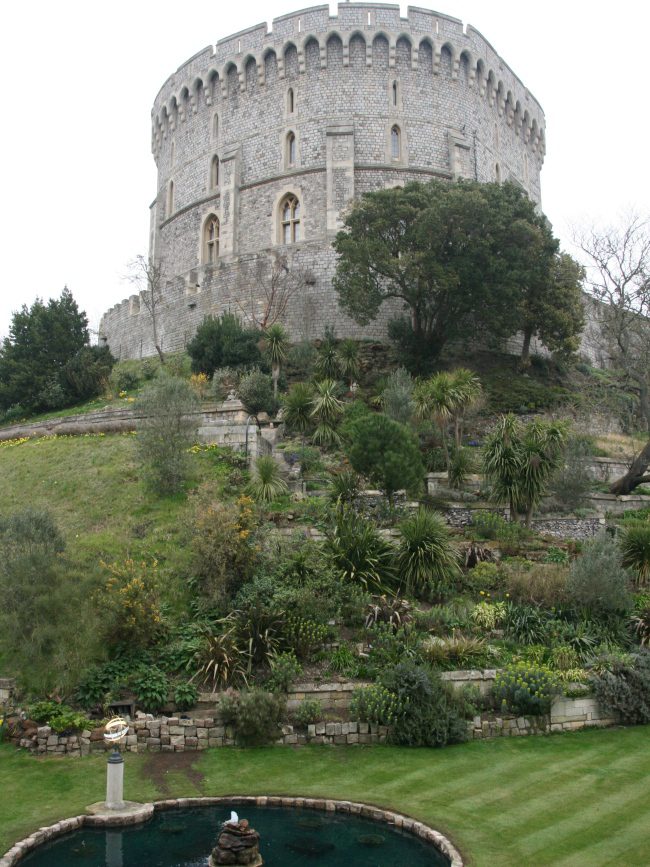 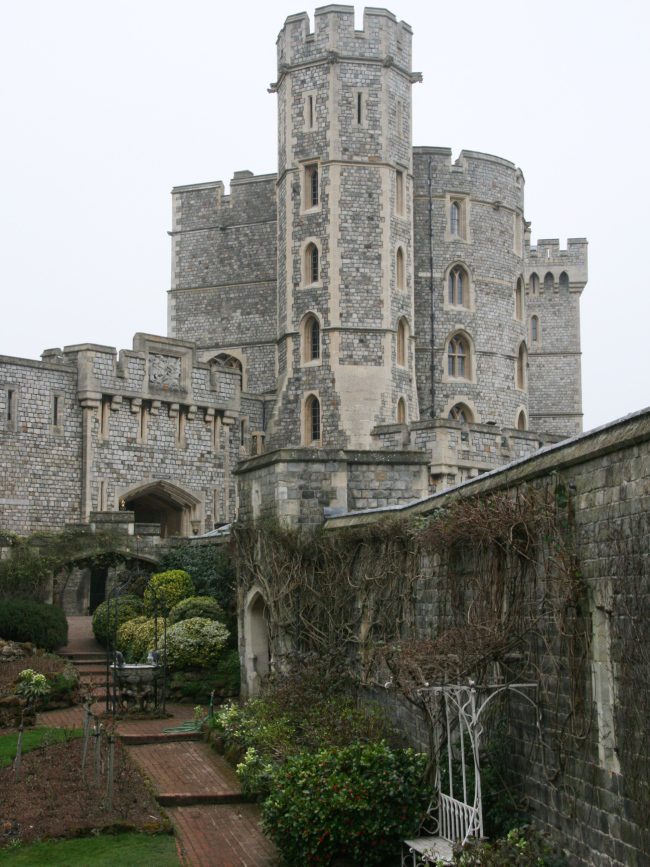 Then we were off to the courtyard in front of St George’s Chapel for the rest of the changing of the guards ceremony. There were already plenty of people clustered in front of the cordoned off area, so I took Little T out of his stroller and carried him so he had a good view of the guards marching to and fro… 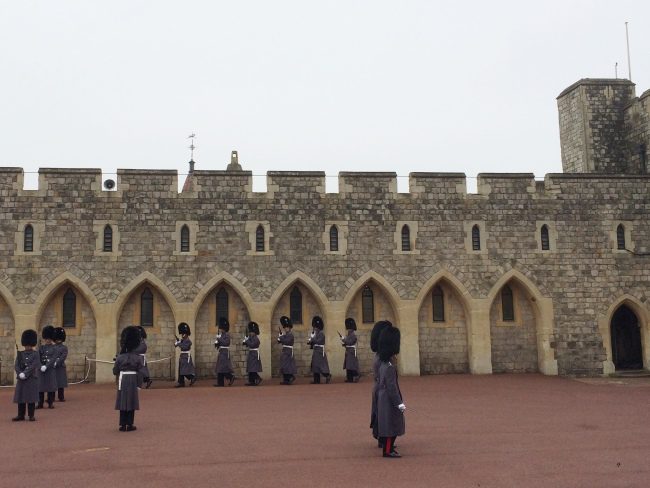 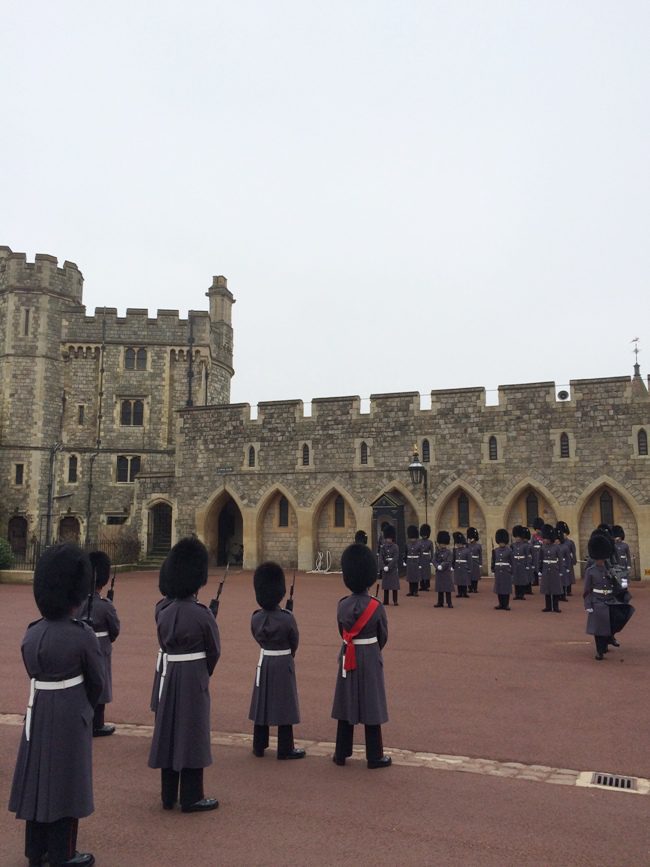 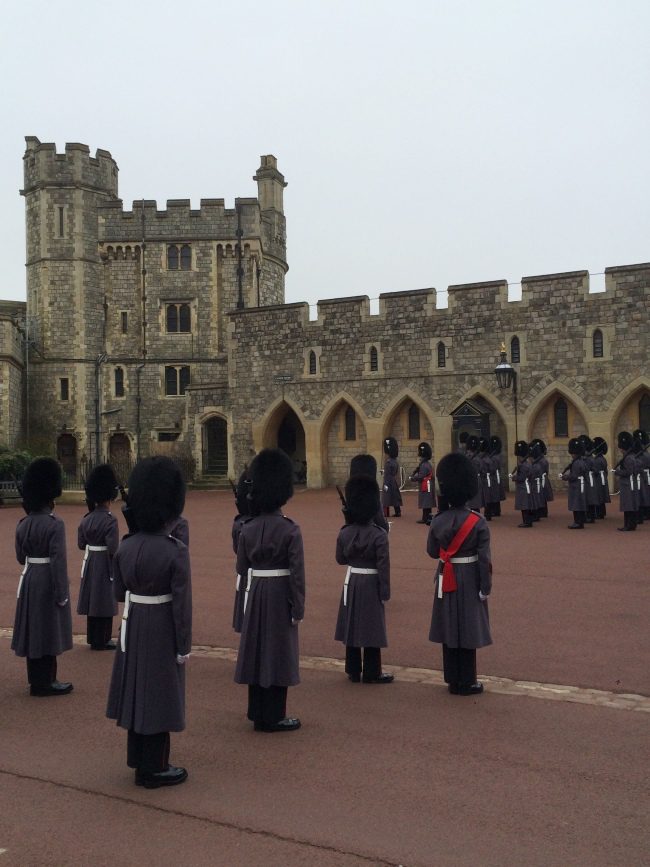 It was interesting to watch and Little T thoroughly enjoyed it! With the audio tour device in hand, Little T went back into his stroller for us to make our way back up towards the Round Tower to have a look at the State Apartments. It was still a hazy morning at that point. Hopefully next time we visit on a clear day to enjoy a spectacular view of the countryside. 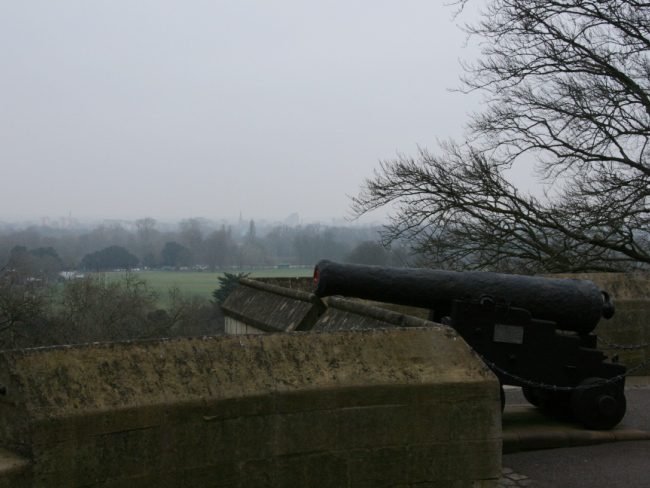 Pushchairs are not allowed in the State Apartments and have to be checked in at the cloakroom which is located at the entrance… after two or three sets of steps. I lucked out when another visitor offered to help me carry the stroller (and Little T) up the stairs. Another option could have been to collapse the pushchair and help Little T up the steps, or there are staff members around that might have been able to offer help. Once at the cloakroom, I checked in pretty much everything except my handbag. Since photography is not allowed in the State Apartments, there was no point in lugging around my camera and it helped to keep my hands free so I could walk with Little T or, when necessary, pick him up and carry him around.

After checking in our stuff (it’s free), we stopped first at the Queen Mary’s Dolls’ House, which is located in a separate room across from the entrance to the State Apartments. This house was made in 1924 by the architect Sir Edwin Lutyens, with the intention of creating an accurate record of an aristocratic London house of the time, including running water and electricity and working lifts, along with thousands of objects made by over 1500 leading artists, designers and craftsmen on the tiny scale of 1 to 12. On your way out of this area, there is also an exhibit of children’s clothing and toys which could be interesting for older children to compare to what they wear and play with today. 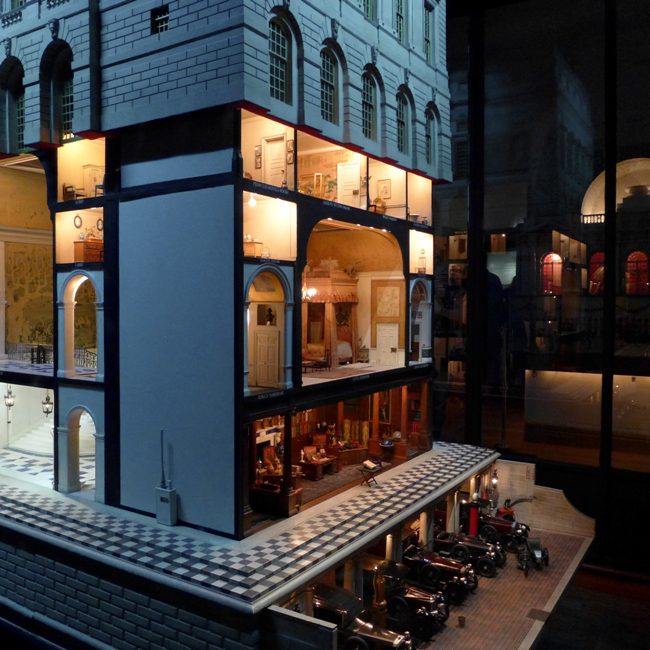 We entered the State Apartments again, passed by the bone china displays and walked through the sequence of rooms that were built for Charles II and his Queen, Catherine of Braganza, between 1675 and 1678. Featuring elaborate painted ceilings, panelled walls and stunning carvings, these rooms were the grandest sequence of baroque State Apartments in England.

Now, I believe the audio tour lasts around an hour, so that is the approximately the amount of time most people spend at the State Apartments, taking in the artwork and sculptures, bone china and furniture, listening to the history and significance behind each room… As can be imagined, the experience is different with a lively toddler, and in contrast to the other visitors, Little T and I whizzed right through, stopping here and there for a closer look, usually at a sculpture or painting. We moved through a lot faster than I would have liked, but I’m glad we had a chance to visit and that Little T seemed to enjoy the experience. 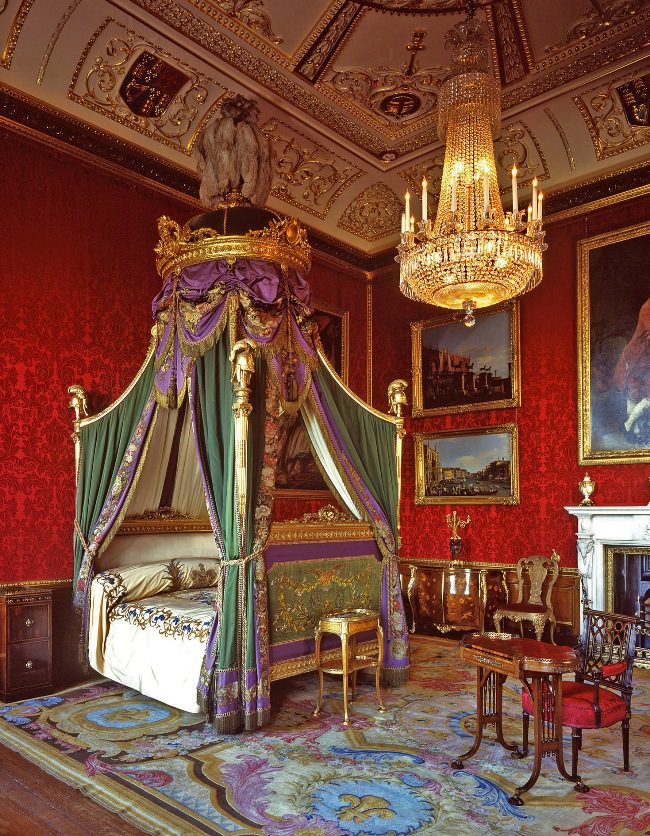 The Bedchamber of the King [Photo Credit: The British Monarchy] 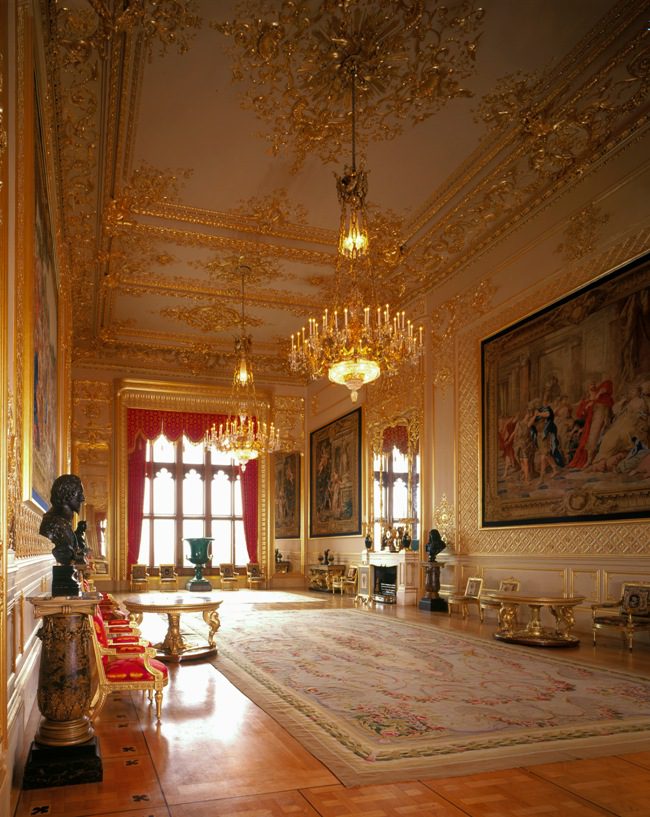 We made it back to the cloakroom where I could also have my ticket stamped so I could continue to visit Windsor Castle over the next year for free. Once Little T was back in his stroller, we had a nice walk through the castle grounds to the exit… 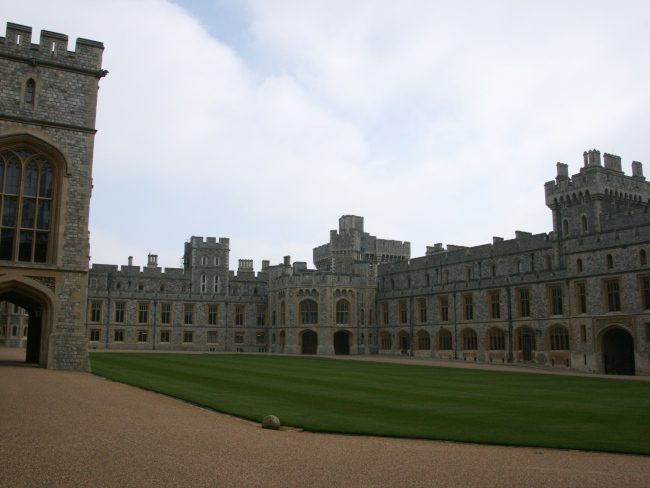 The sun was just coming out and it was almost lunchtime… 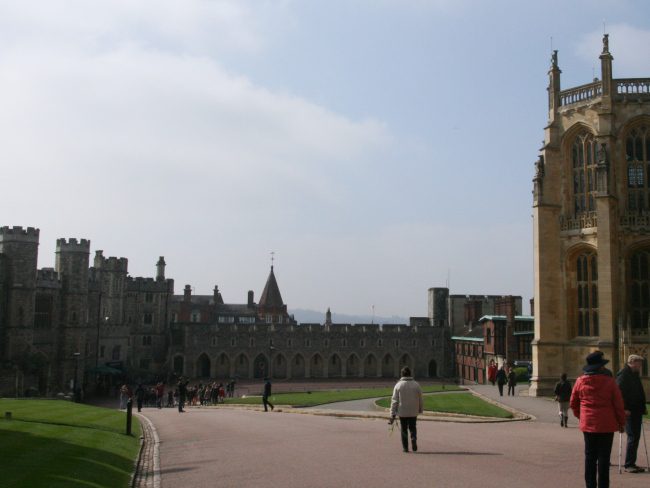 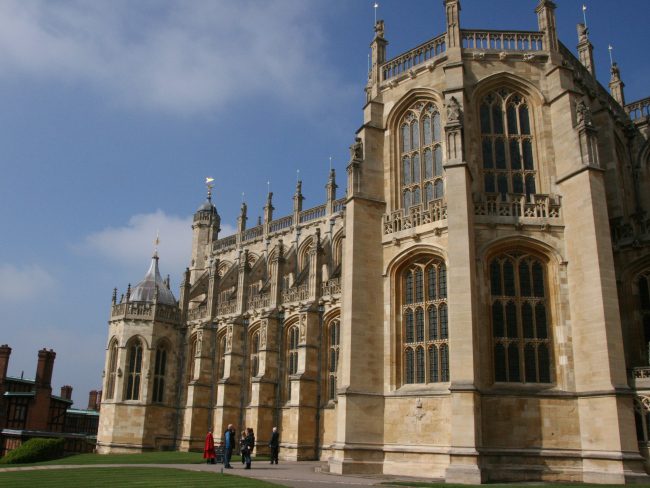 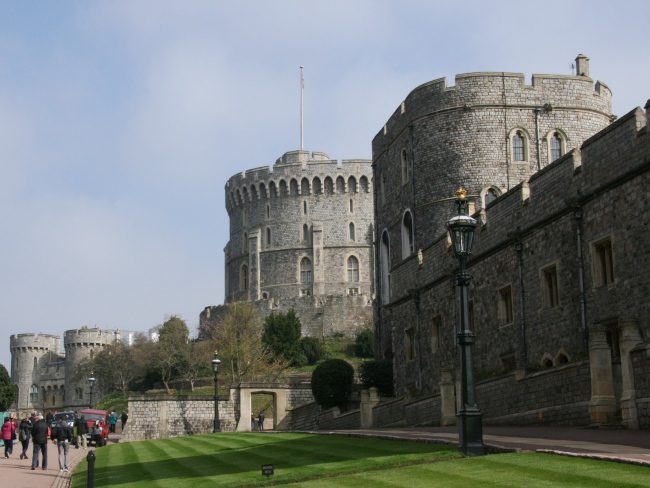 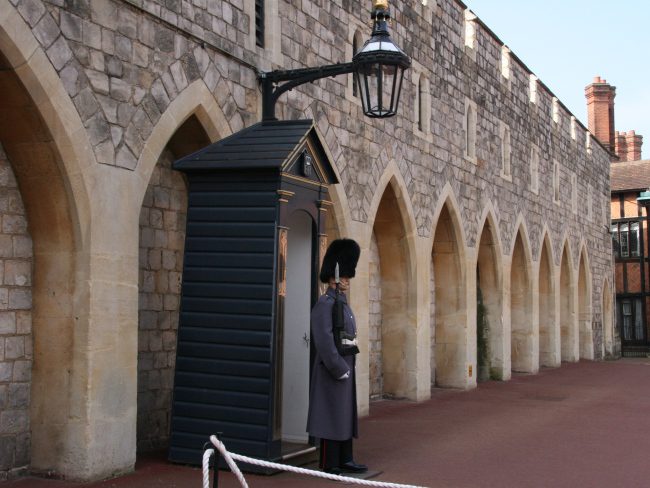 Little T reluctantly handed the audio tour device back to the staff on the way out and with clear skies ahead of us (how the weather can completely change over here!), we made our way through Windsor to the riverside… 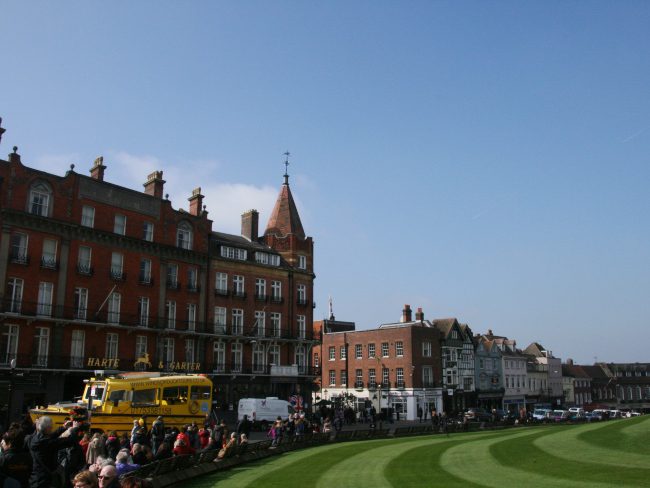 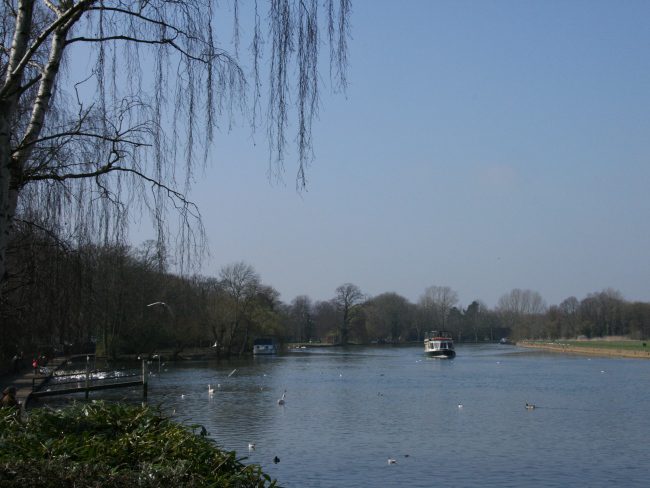 … where swans, geese and ducks swarmed the promenade since apparently they enjoy an endless supply of breadcrumbs from passersby. It turned out to be a beautiful day with the beginnings of spring approaching! 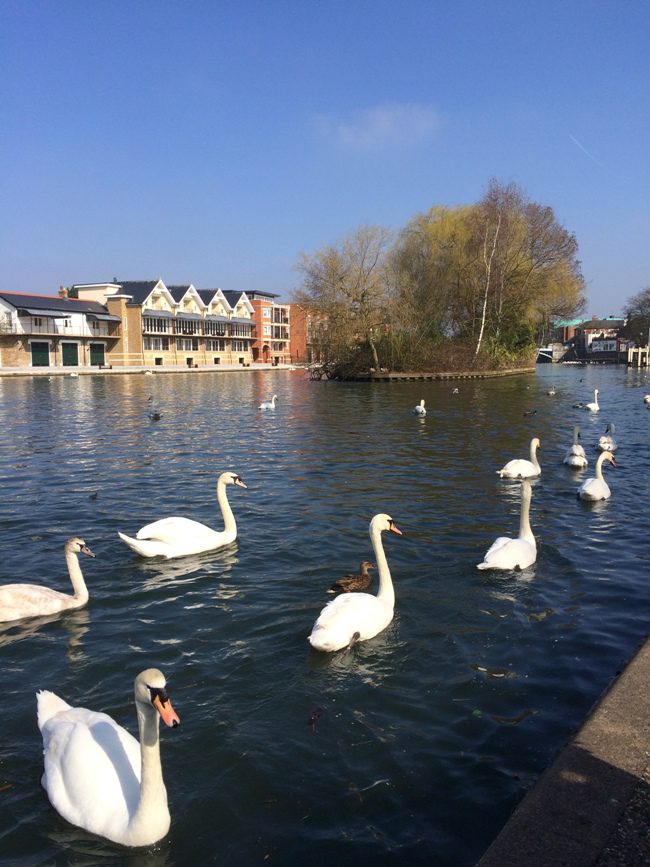 While it is not a typical place to bring a toddler and we whizzed right through some interesting displays and exhibits, I enjoyed our trip to Windsor and finally, after nine years of living in London, took the time to visit Windsor Castle. The highlight for Little T was watching the changing of the guards, seeing the large horse sculptures at the State Apartments and being surrounded by flocks of birds at the riverside. I would recommend visiting if you’re looking for a new place to spend a morning or afternoon exploring with your little one, while taking in some of the country’s history and heritage.

Parking: There are plenty of open air car parks to choose from the moment you arrive in Windsor and they’ve helpfully mapped them out, with their prices, on the Royal Borough of Windsor and Maidenhead website. When I planned the trip, I chose the River Street parking lot which was just down the road from the castle entrance and paid £8.00 for between 2 to 3 hours using the ParkMobile Pay by Mobile service.

Tickets: Adult tickets are £19.20, children aged 5 to 17 are £11.30, under 5s go for free and souvenir guides cost £4.95 (more info here). Skip the queues and purchase your tickets (and souvenir guide if you want one) ahead of time from the Royal Collection Trust website – you can then pick up your tickets and souvenir guide at the entrance and whiz on through to security.  Have your ticket stamped before you leave (I had mine stamped at the State Apartments cloakroom when I was picking up the stroller) to make it a 1-Year pass, which gives you 12 months of complimentary admission at Windsor Castle.

One thought on “A Morning at Windsor Castle”