This month the leaves have been gradually changing into bright autumn colours around London and the surrounding areas. It’s such a beautiful time of year and we’ve been making the most of it with some days out in the local parks and countryside. I’ve been working my way through my bucket list of National Trust sites to visit, and one that I’ve had my eye on for a while is Scotney Castle in Lamberhurst, Kent.

Scotney Castle is about a 2 hour drive from west London, quite some distance away for a walk in the countryside, but it was a place that kept springing to mind especially after I saw photos of the picturesque, ivy-covered medieval castle surrounded by autumn foliage.

Yesterday I went ahead and packed up the camera and a picnic lunch, Little T picked a few toys for the car ride and off we went to Kent. Scotney Castle estate turned out to be one of the most beautiful places, especially with the stunning autumn colors across the grounds.

What you’ll find at the Scotney Castle estate is a country house (shown above, built in the 1800s), 780 acres of parkland and woodland, and stunning formal gardens with the 14th century, moated Scotney Old Castle that was deliberately ruined to create a romantic feature for the gardens when the new house was built.

We received a timed ticket to tour the house, which took us about 10 minutes to explore as with Little T, we tend to move pretty quickly through these types of tours.

An interesting fact about the house: it was built using sandstone quarried from the slope below. The hollow created was made into a Quarry Garden that contains a 100-million-year-old impression of a dinosaur’s footprint. I didn’t know that at the time – I would have been interested to see that!

After a quick look at the house, we set out to explore the gardens and the old castle. The estate grounds are bursting with gorgeous autumn colours throughout, truly stunning to see.

The Old Castle was built around 1378 and over the next 450 years was lived in by three different families. In 1830, when Edward Hussey III commissioned architect Anthony Salvin to build a new house on the estate, he decided to ruin the Old Castle to create a romantic element to the garden. 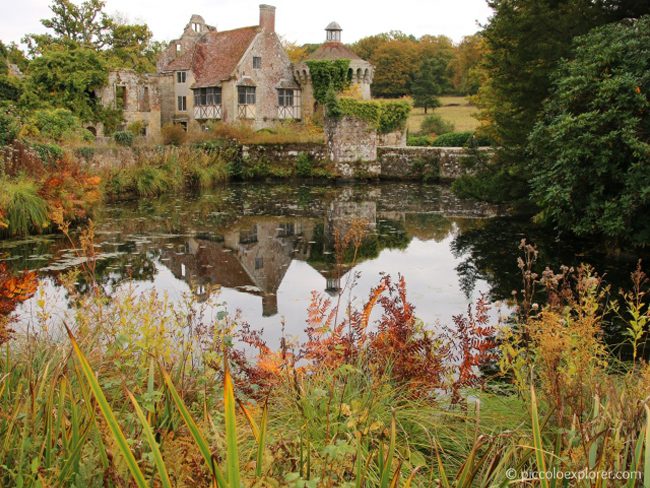 The Old Castle looks straight out of a fairytale! The castle is empty but you can have a look around inside. There’s a small closet where a Catholic priest was hidden from 1591 to 1598 when Catholicism was illegal in England – there was a second raid by authorities and the priest ended up jumping into the moat and fleeing.

We spent a few hours exploring the estate and roaming around the gardens before making our way back to the exit for a snack at the café. Here are a few more shots from our day… 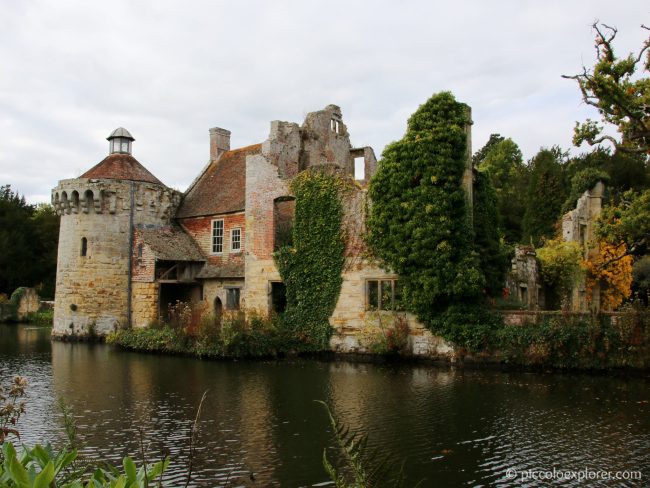 Scotney Castle is a truly stunning, picturesque place and the autumn colours make for some gorgeous views around the estate. We had a great day exploring the grounds and I was very happy to make it out there! I know it’s a bit far for a typical day out from London but if you find yourself heading to that area, I do recommend checking it out.

Tickets: £13.00 for adults, £6.50 for children aged 5 and up. Gift Aid Admission available. Entry free for National Trust members and under 5’s.

If you’re using SatNav / Google Maps, use the postcode TN3 8JN and once you’re on the A21, follow signs for Scotney Castle. (Following the Google Maps directions will send you down a narrow dirt road past farms that ends up at the back of the estate’s parking lot – a scenic route, but preferable to use the correct entrance)

There’s a café, souvenir store and restrooms around the entrance.

Activities for families at the estate include natural play trails, dens and a Discovery Room, where you can find out what a mole tunnel looks like or what it feels like to stroke a wild animal.