Our Easter Holiday in Fano, Italy

We spent our Easter holiday in Fano, Italy, visiting my husband’s side of the family. Fano is a charming seaside town on the Adriatic coast in the Marche region of central Italy. Marche – located between Emilia-Romagna to the north and Abruzzo to the south – is renown for its picturesque, hilly countryside and beautiful 180 km-long coastline. Fano is the third largest city in the region by population, after Ancona and Pesaro, and the closest airport is the Marche Airport outside Ancona, which RyanAir flies to out of London Stansted.

We usually holiday in Fano at least 4 times a year, for Easter, a couple of times over the summer and at Christmas. And since Little T was born, we’ve been visiting even more frequently, at one point nearly every two months. It’s a lovely place to visit, especially in the summertime when the beaches are set up with rows of umbrellas and people socialize over drinks at the bars along the beach promenade.

In this Snapshots post, I’ll be sharing photos of our Easter holiday in Fano, Italy, and some of our favourite places to visit whenever we’re in town.

During our visits we’re often in the town center, running errands, shopping or stopping at one of our favorite cafés or bars for an aperitivo before dinner. Fano is a good-sized town, however, still small enough that we are always running into people we know as we walk along the main street, Corso Matteotti, or the big square, Piazza XX Settembre. 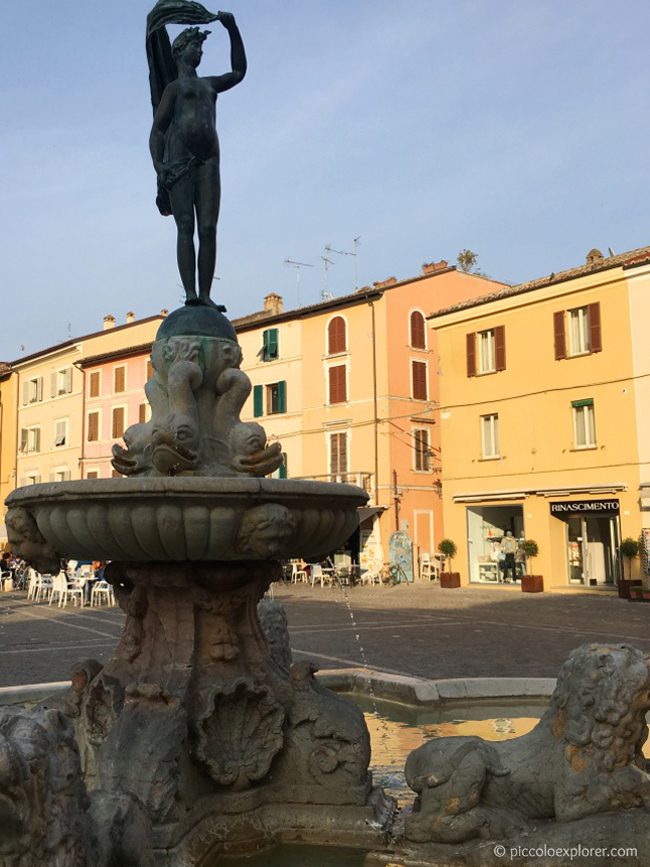 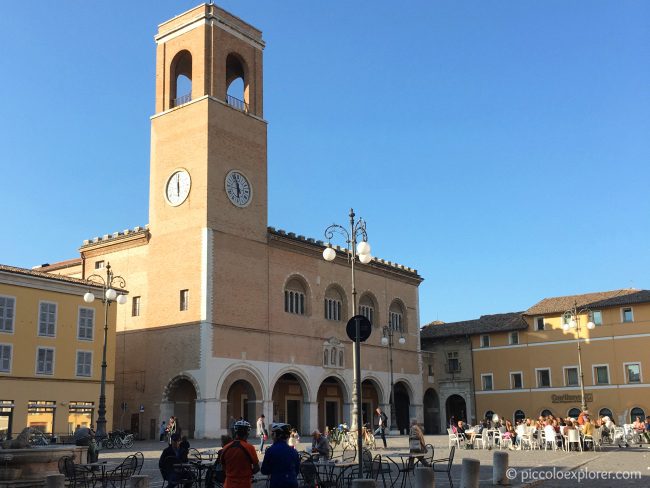 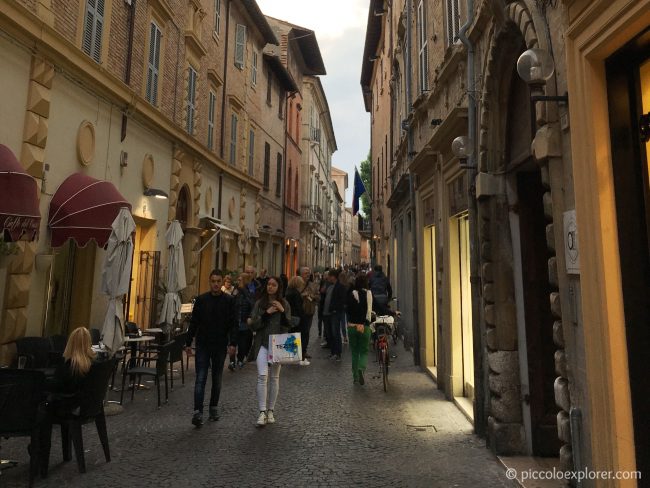 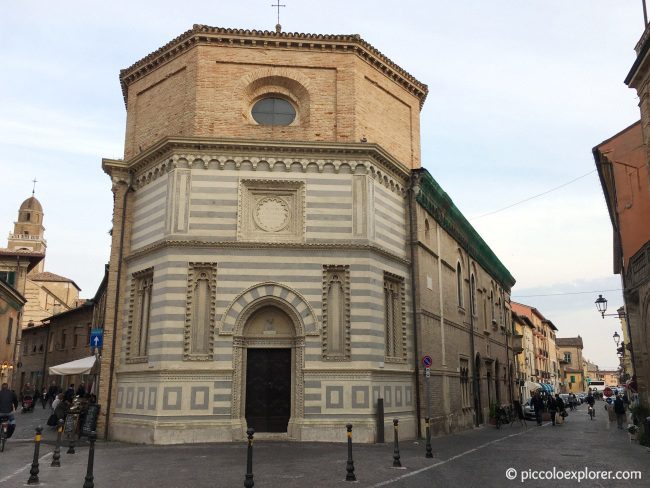 I love to browse the side streets too and admire the characteristic buildings and doors, bright colors and beautifully dressed windowsills. 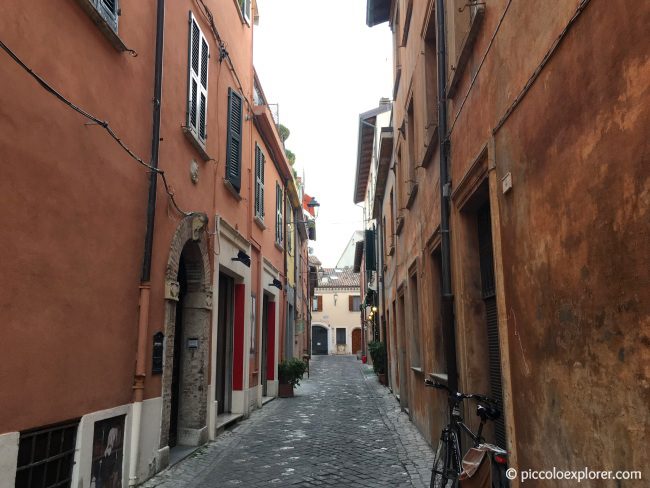 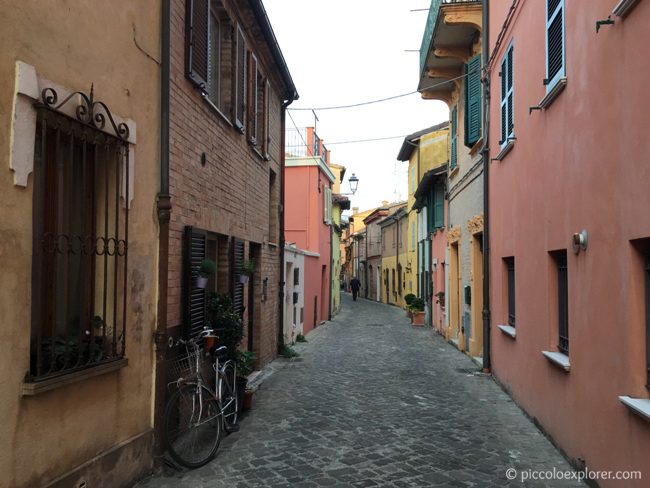 During Ancient Roman times, Fano was a colony named Fanum Fortunae, after a temple to the goddess of Fortune that once stood there, as well as an important port and crossroads.

About 2/3 of the Roman walls still partially surround Fano’s town center. One day we took a walk along the perimeter on our way into town, passing by the Porta della Mandria, or Gate of the Herd, which was where livestock were brought through to graze nearby. 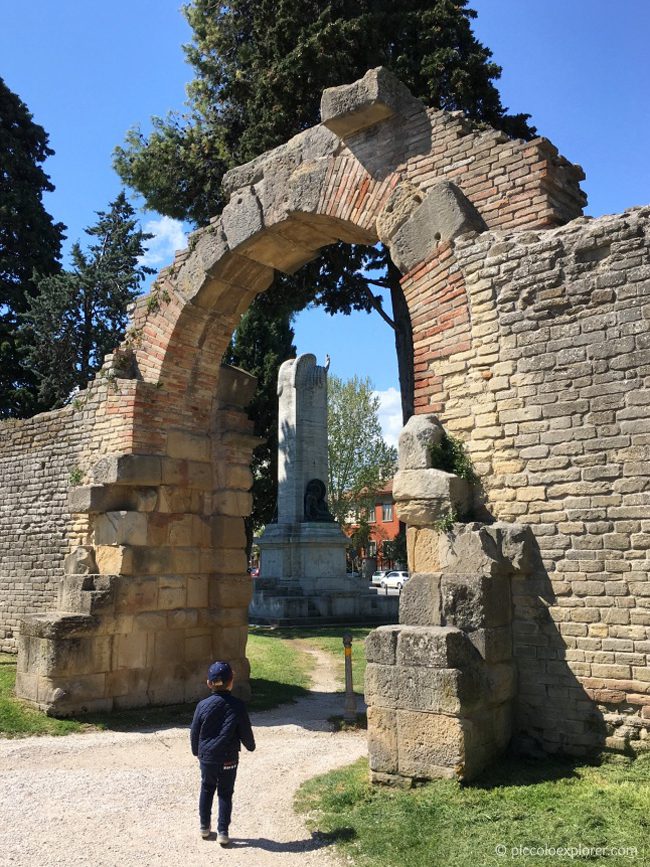 Further along is the Arco di Augusto, a triumphal arch that was built in 2 AD under Roman Emperor Augustus and served as a gateway to the town, marking the arrival of the Via Flaminia on the shores of the Adriatic Sea. 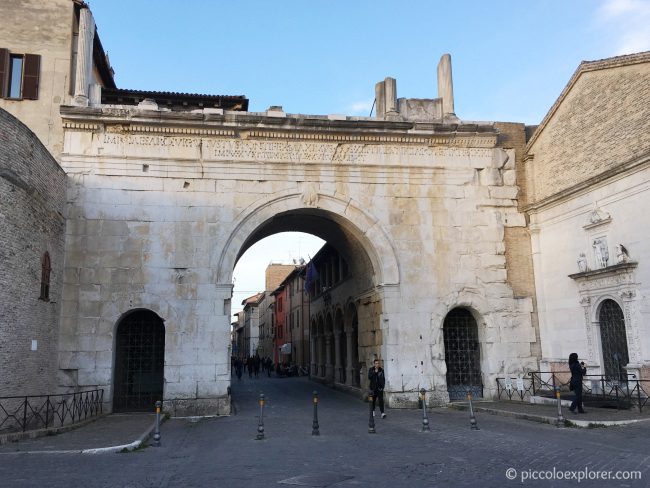 Through the years – and I’ve been going on holiday in Fano for 15 years now (!) – we always make a stop at Il Buongusto, a specialty food and wine shop (drogheria-enoteca) at the end of the main street. Every season, the shop has lovely displays and over Easter, Christmas and the Epiphany, it’s especially delightful to browse the selection of gifts and chocolates. 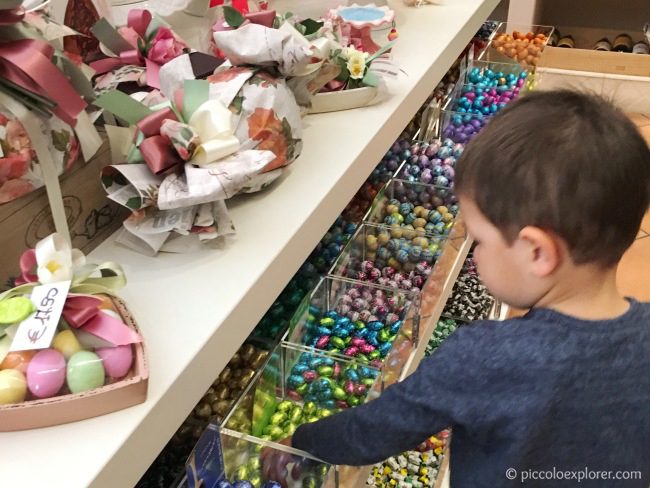 It’s where we go to buy wine – they have a great selection – and whenever we need a special gift basket prepared. And we always end up with a little bag of small chocolates – too tempting to resist! 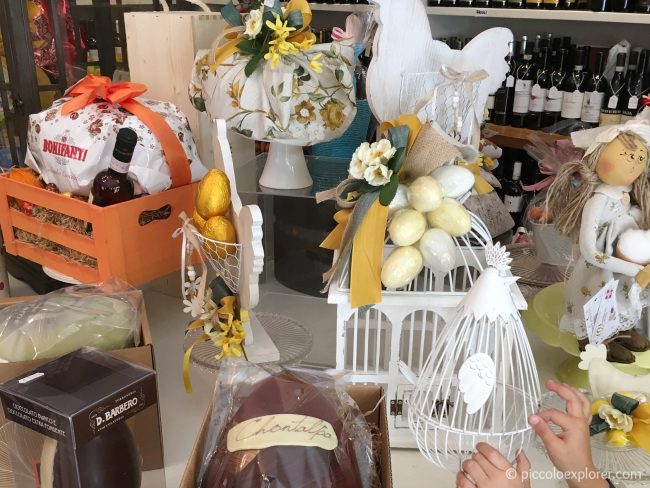 Il Buongusto also sells local specialty foods, including products such as biscuits and chocolate made with moretta, a coffee that is particular to Fano. 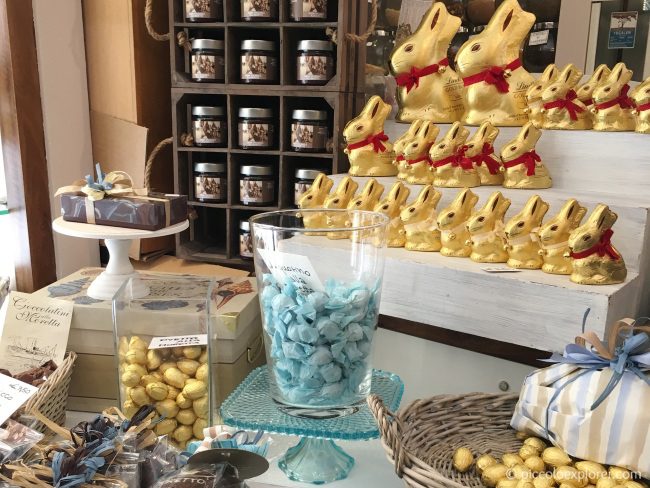 We’re only about a five minute walk from Lido beach, so it’s some place we go to, weather permitting, fairly often year round. Our trip started with sunny, almost summery weather, perfect for spending time at the beach. The beach playgrounds along Lido’s promenade are always busy with local families, and the funfair opened its big trampoline area – Little T had a blast there one evening. 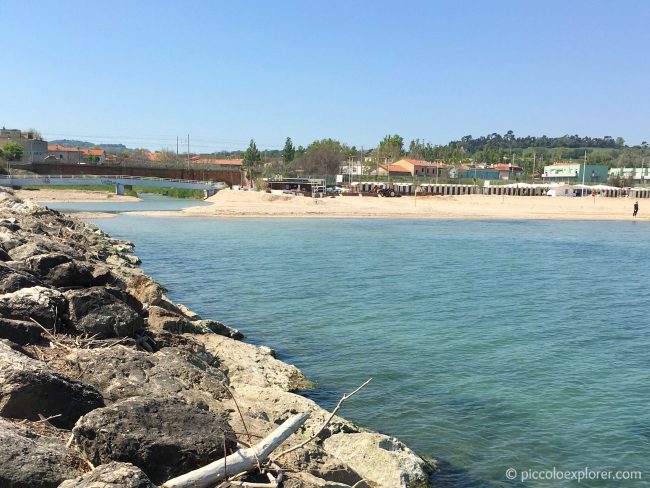 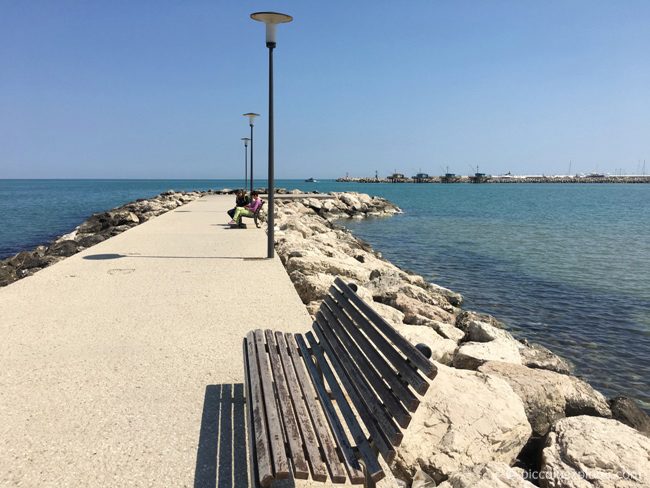 The fishing port of Fano sits between the Lido and Sassonia beaches and nearby there’s a private marina. My father-in-law often comes to the port first thing to buy seafood when the fishermen are just returning with their catch. 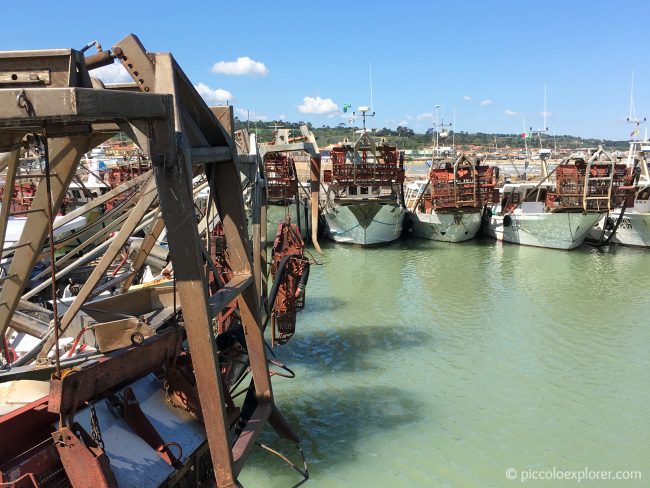 The neighborhood near the port features many quaint, typical houses still marked with maritime flags. 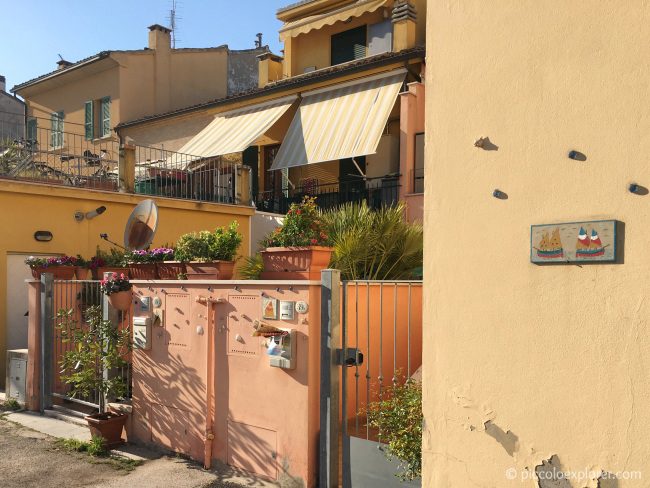 Further along is Sassonia, named after its pebble beach. The beaches of Lido and Sassonia are lined with brightly painted beach huts, and over the summer, the big umbrellas are set up along Fano’s shore. 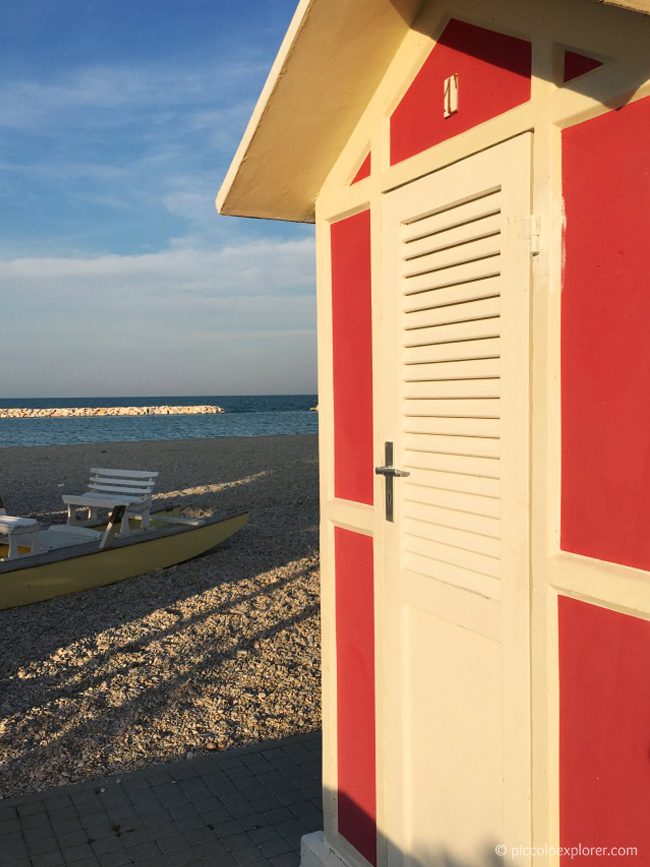 Sassonia beach also has several sports facilities, i.e. tennis and volleyball courts and outdoor swimming pools that are typically busy between May and September. For now, the beach was quiet as we kicked a ball around then tossed pebbles into the water. 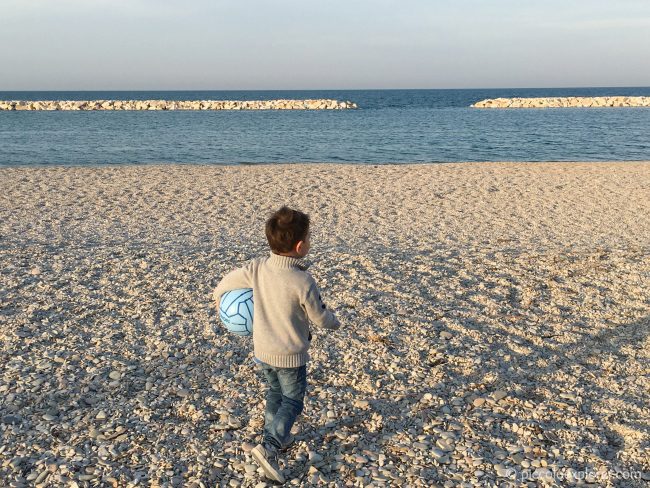 The countryside of Le Marche is very beautiful – rolling green hills, picturesque villages and farms and patches of color in the spring and summer, like this bright yellow field we found on the outskirts of Fano. 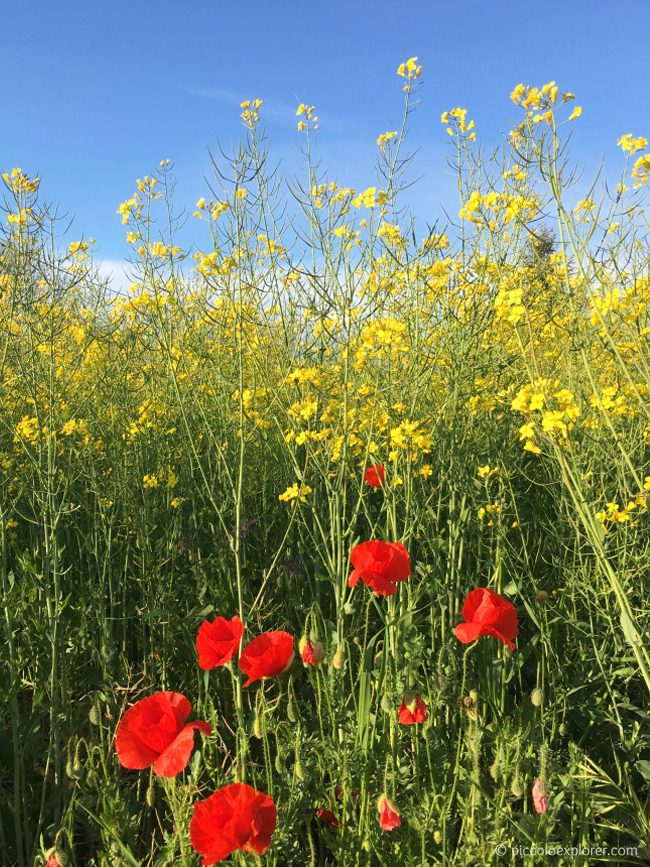 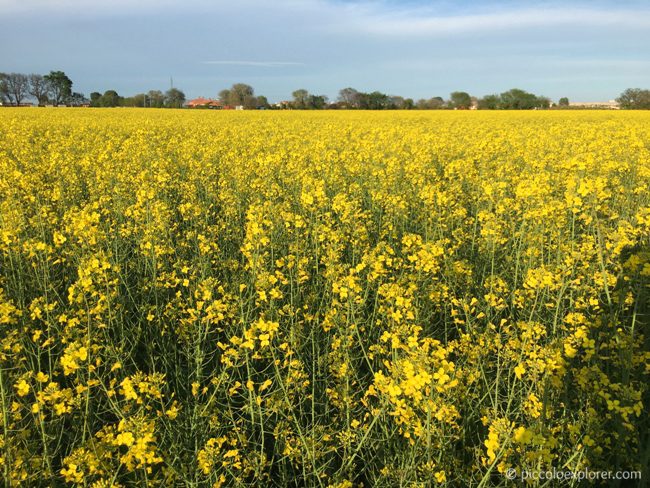 On Easter Monday, we headed into the countryside to nearby Mondolfo for lunch at Ristorante I 7 Archi, enjoying beautiful views overlooking the seaside along the way. 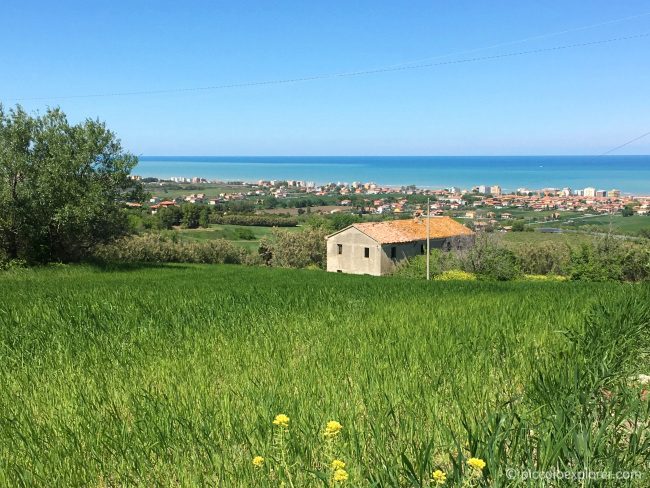 As it was the holidays, we mostly ate at home but now and then we headed out for dinner at some of our favorite restaurants.

Osteria dalla Peppa, Fano Centro Citta – This restaurant serves typical regional specialties of the countryside, such as the cresc’tajat I always end up ordering: rustic handmade pasta served with beans. Little T and Mr. G had grilled pork and sausage with grilled vegetables and roasted potatoes. 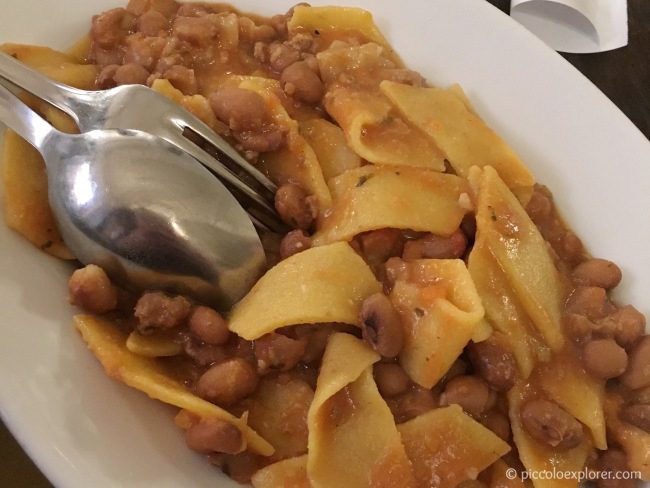 La Mandria, Fano Centro Citta – La Mandria serves mainly wood oven-baked pizza, grilled steak and pasta dishes. I ordered the gnocchi with meat ragu the first time we visited and then grilled filet mignon the second time, both of which were very good. Little T had a margherita pizza and Mr. G also had steak. 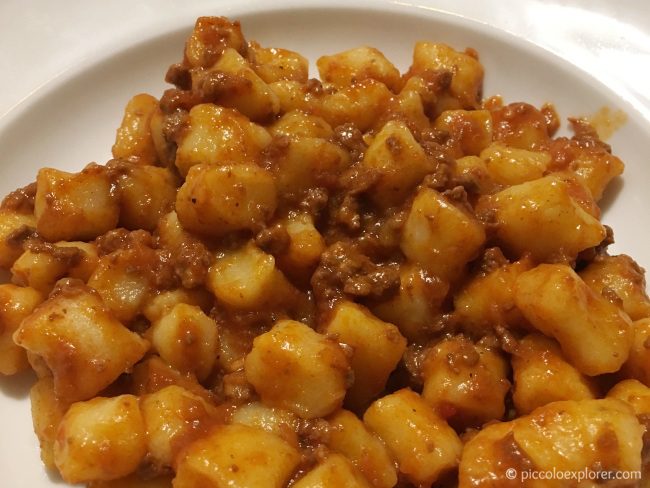 Ristorante I 7 Archi, Mondolfo – I 7 Archi serves local specialties of the Marche region and is a lovely, family-friendly restaurant with a playground and beautiful gardens. We’ve been here a few times for special occasions and have always ate well. I had the passatelli with mushrooms which were delicious. Mr. G ordered grilled tuna and vegetables, while Little T enjoyed a simple dish of spaghetti with tomato sauce. 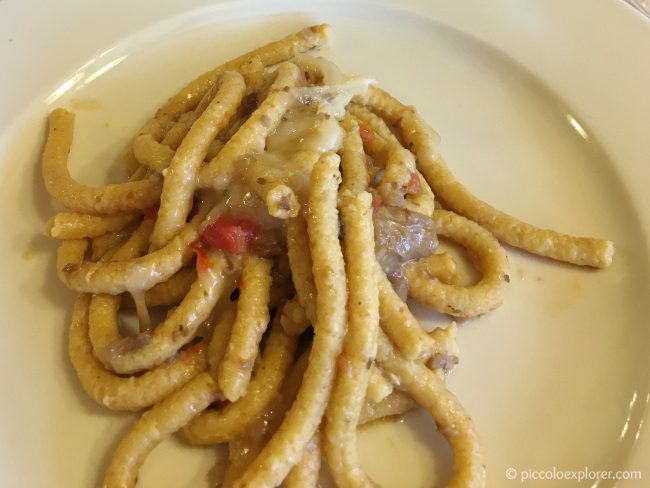 One of the traditional dishes at Easter (and Christmas) is a heaping bowl of handmade cappelletti (small meat-filled, hat-shaped pasta) in broth. We actually have it very frequently year round outside of special occasions too – it’s one of our favorite dishes for lunchtime. 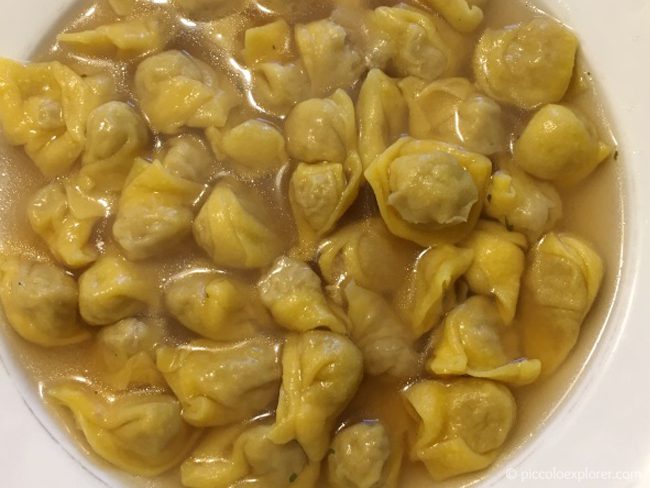 And not the best picture, but for dessert on Easter, we had a scrumptious colomba di Pasqua, or “Easter dove”. It’s an Italian traditional cake shaped like a dove and topped with sugar and almonds. In case you’re wondering what we ate at Easter lunch between the cappelletti and colomba, we had breaded lamb chops, pancetta-wrapped turkey breast and sautéed green beans. 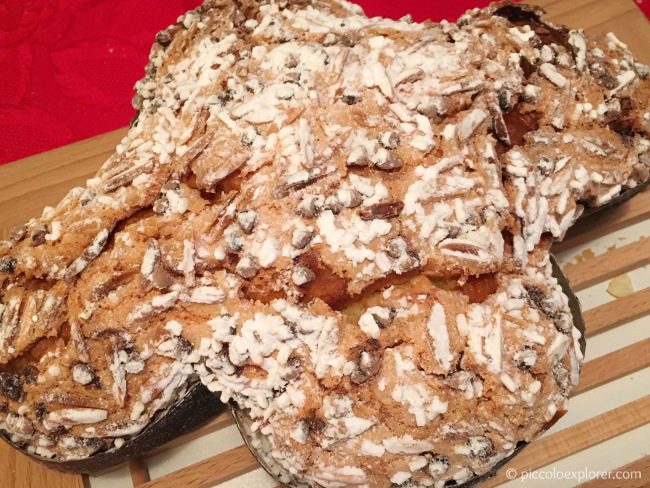 I hope you enjoyed this photo tour of our Easter holiday in Fano, Italy! For more on Fano and the Marche region, have a look at these posts too; 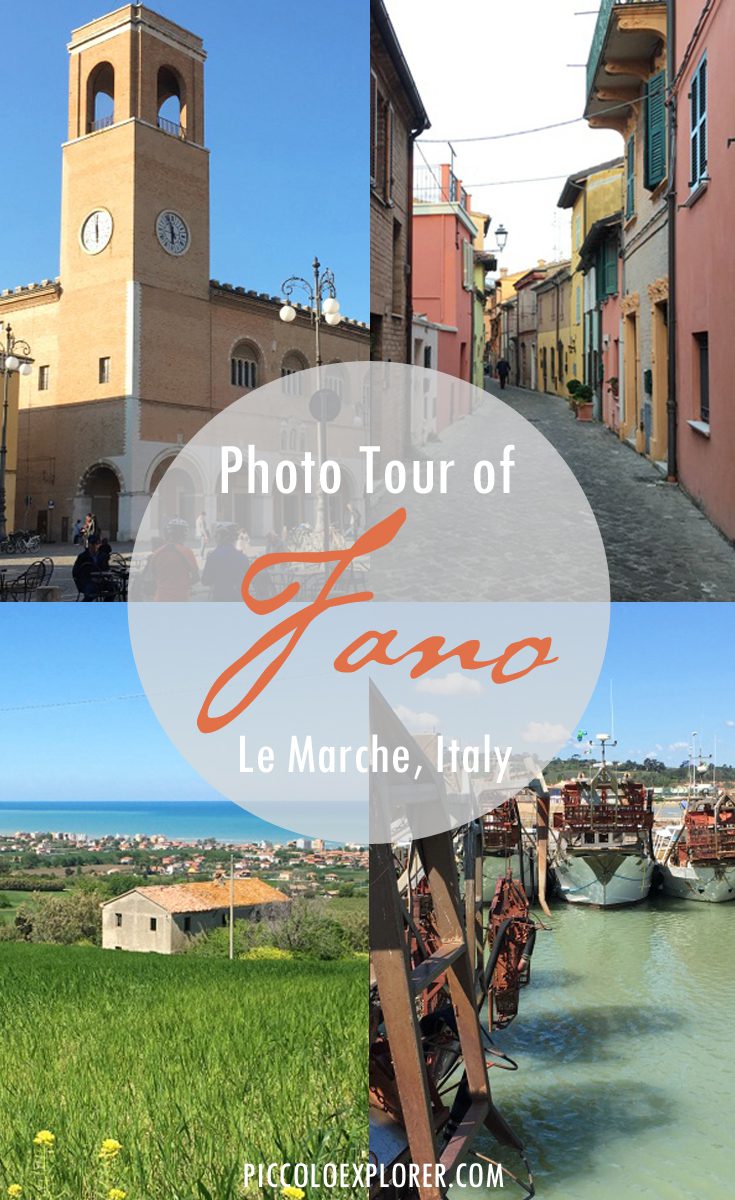 9 thoughts on “Our Easter Holiday in Fano, Italy”