We spent October mostly out and about enjoying the crisp weather and beautiful fall foliage around London, Surrey and Kent. I was determined to visit some National Trust sites I’ve been wanting to see since the beginning of the year, including the picturesque Scotney Castle and Winkworth Arboretum. Also working through my Autumn Bucket List, we had a lovely family day at Garsons Farm picking pumpkins that were painted and carved for Halloween.

Here’s what we were up to around London in October. For more updates, you can find us over on Instagram at @piccoloexplorer.

Ham House is a National Trust property by the river in Richmond – a 17th century house with beautiful gardens and a historic collection of textiles, furniture and paintings. After a picnic in the garden, where you can find the iconic domes of lavender and santolina in the Cherry Garden (pictured below), I brought Little T inside to explore the house which he really enjoyed. We did a rather brisk tour around, but I managed to have a glimpse of the stunning tapestries, beautifully designed furniture and woodwork, many of which have been at the house for over 400 years. 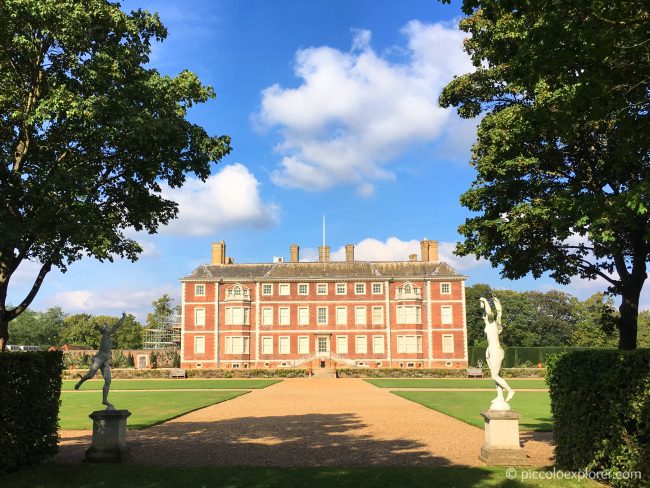 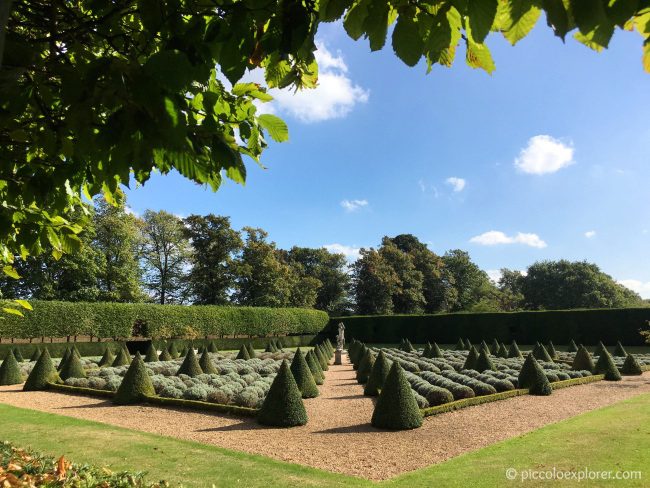 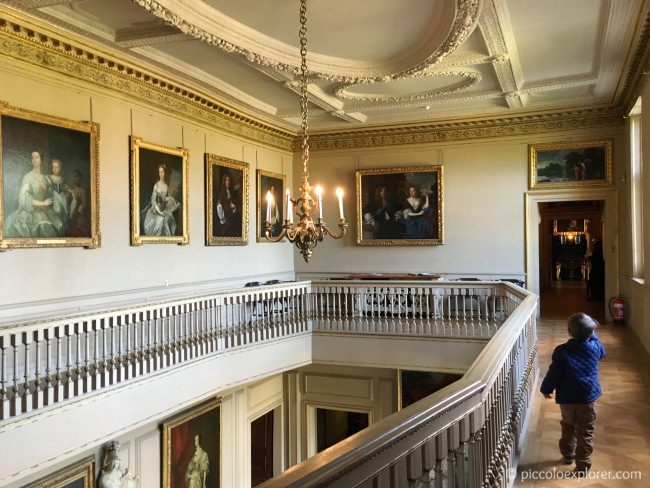 Osterley House features regularly in these monthly recaps! Our visit in October was the first time we had a look around the house. There was a scavenger hunt for kids that we participated in, with an activity in each room we explored, such as putting together a jigsaw of a London map and trying on antique party masks. 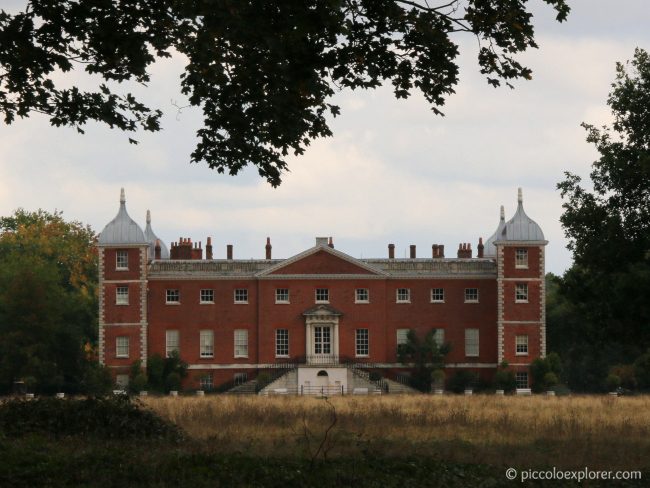 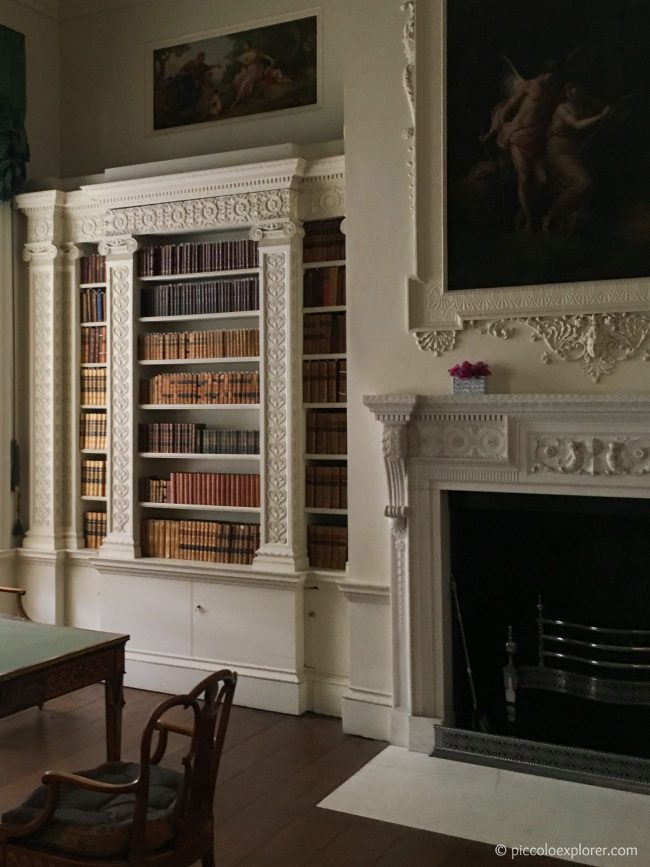 After exploring the house, we headed out to the play trail for the woodland walk we’ve enjoyed year round! 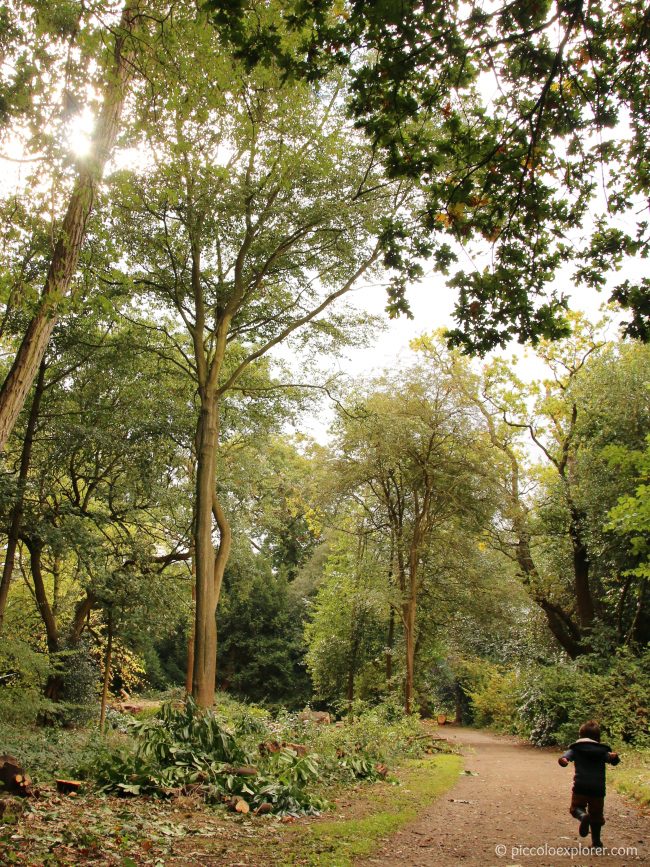 It was our first time back at Cliveden since February, and we had a lovely day walking through the woodland and gardens before heading over to the play den, where there’s a café and a great playground. The striking shell fountain shown below is the Fountain of Love, sculpted by Thomas Waldo Story in Rome in 1897 using marble and volcanic rock and located at the end of the avenue that leads to Cliveden House. 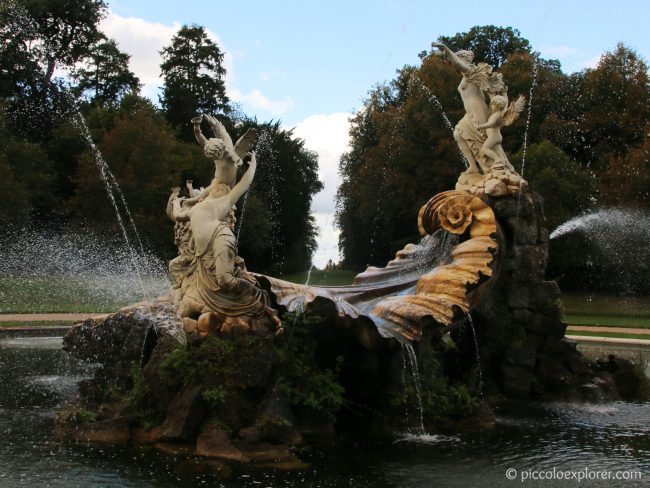 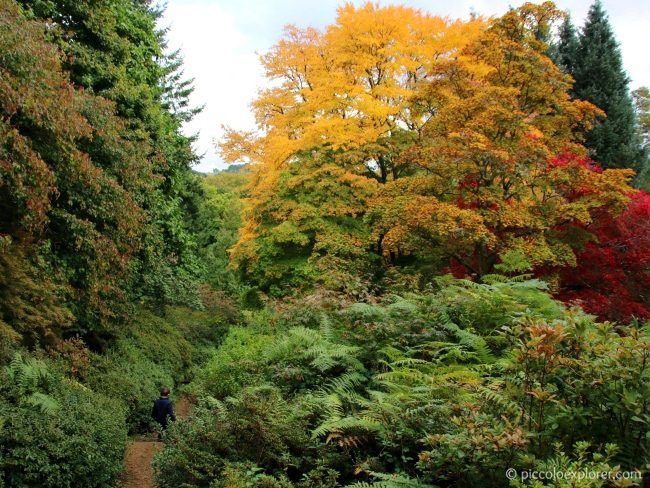 Whenever we’re around Heathrow Airport to pick up or drop off Mr. G for a work trip, I usually bring Little T to Myrtle Avenue for some plane spotting. It’s usually fairly easy to find parking on this small residential street and you’ll often see a row of plane spotters and professional photographers along one side of the small park. It’s an excellent spot for watching the planes come in to land. 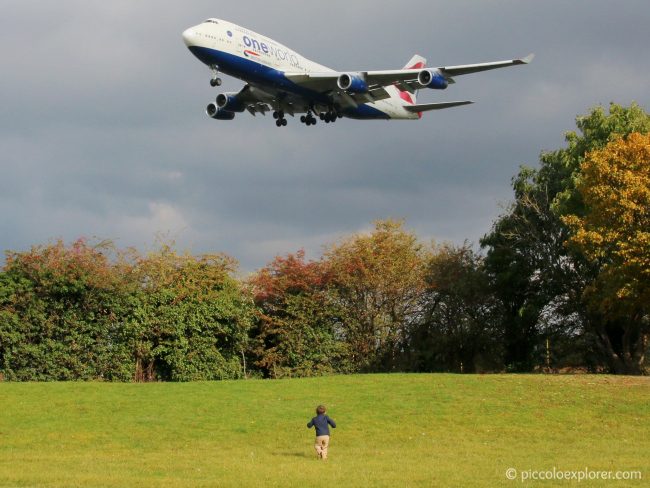 I’ve been wanting to see the British Museum’s Sunken Cities: Egypt’s Lost Worlds exhibition since reading about it on MummyTravels, and with it coming to an end in November, I made sure to book a ticket for an afternoon while Little T was at preschool. The exhibition was about two lost ancient Egyptian cities, Thonis-Heracleion and Canopus, that have been submerged under the Mediterranean Sea for over a thousand years and were rediscovered by underwater archeologists only 20 years ago.

200 of the objects they’ve excavated off the coast of Egypt were shown in the exhibition – from domestic items and jewellery to black stone slabs with hieroglyphs, stone coffins and massive statues of pharaohs and deities, including a five meter tall statue of Hapi, Egyptian god of the Nile floor. The exhibition was fascinating, and it was amazing to see what they’ve recovered and learn more about those once important commercial and religious centers. It was a great afternoon at my favorite London museum and I’m glad I put some time aside to visit the exhibition! 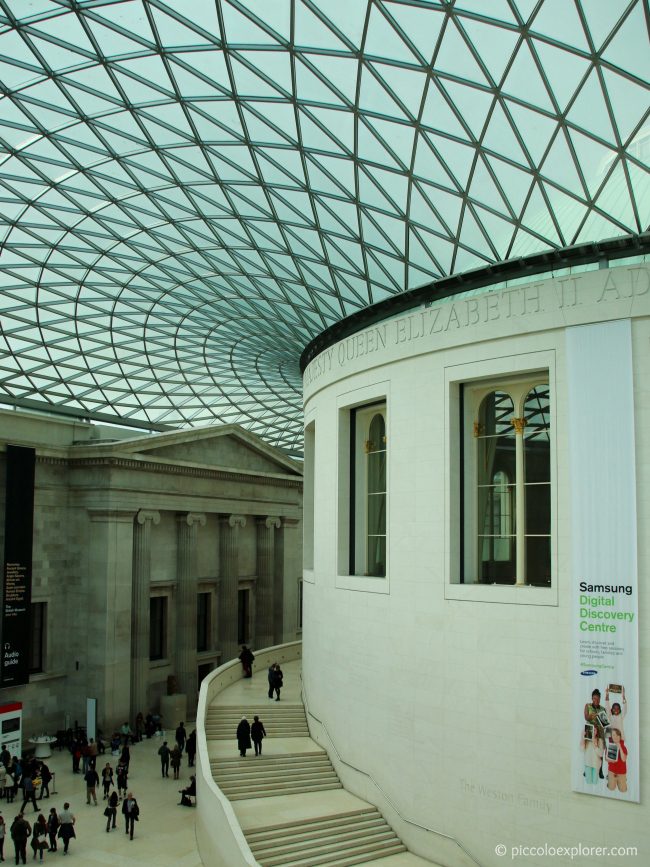 And also to stand back and admire the amazing ceiling over the Great Court designed by Foster and Partners. 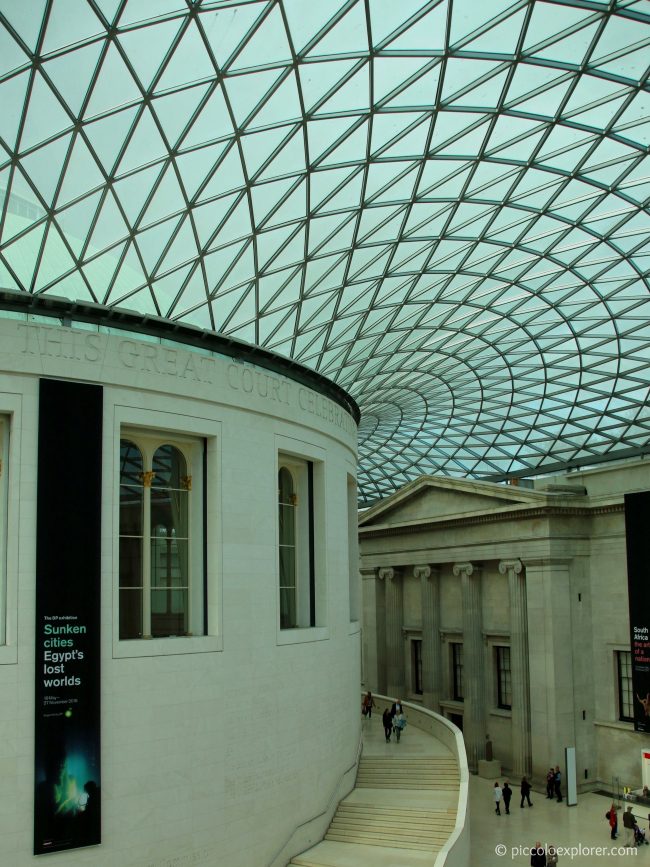 Scotney Castle was right up there at the top of my National Trust bucket list this year after seeing photos of this unique, picturesque estate located in Kent. It takes about two hours or more to get there from London, so ideally would be a day out if you’re staying closer in the area or want to make a stop on your way somewhere else, but it is definitely worth a visit.

The Scotney Castle estate consists of a country house built in the 1800s, woodland area and a beautiful garden with a 14th century moated castle that was deliberately ruined to create a romantic feature. We had a great day exploring the grounds with its bright autumn colours – I’ve written more about our visit to Scotney Castle in a separate post.

After our day of fruit, vegetable and sunflower picking last month, we returned to Garsons Farm to pick our pumpkins at the patch. It’s become an annual family tradition and Little T loves choosing two small pumpkins, although one he chose wasn’t in particularly good shape and didn’t last very long (I tried to convince him to swap it, but he really had his heart set on it), the other was fine and ended up being painted (with white and blue paint) and displayed on our doorstep. Meanwhile, Mr. G and I chose three more pumpkins to carve for Halloween. 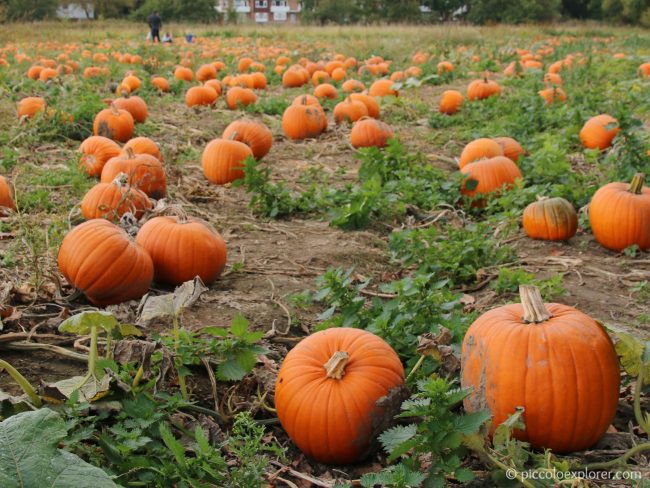 And the farm shop at Garsons is always a pleasure to visit! Great selection of seasonal produce and gifts for the holidays – and even a small section of American groceries (baking ingredients, candy, cereals etc). 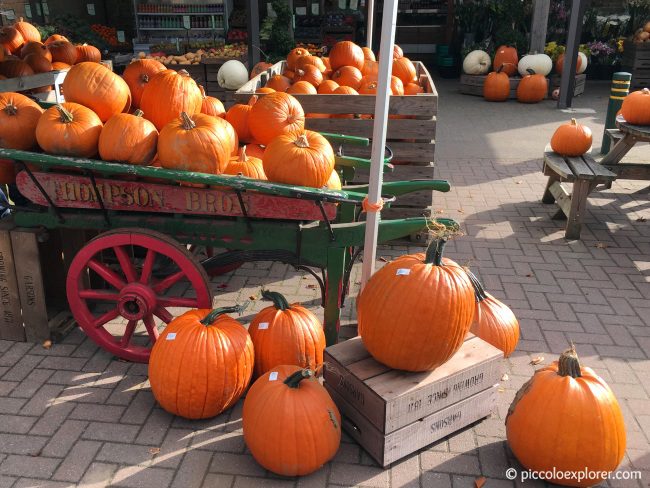 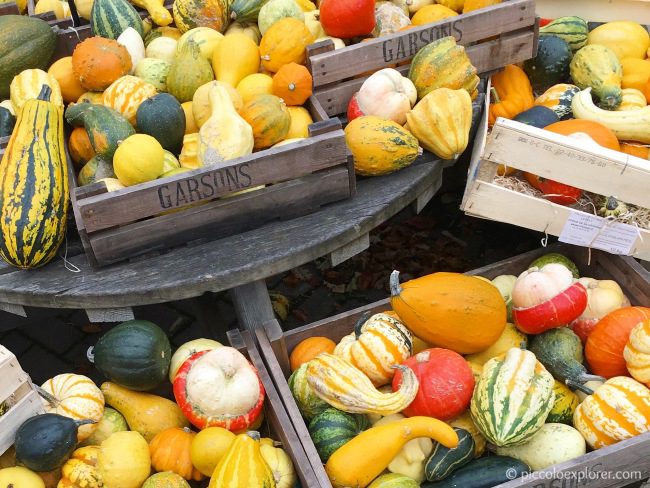 And here are those three pumpkins ready for Halloween! 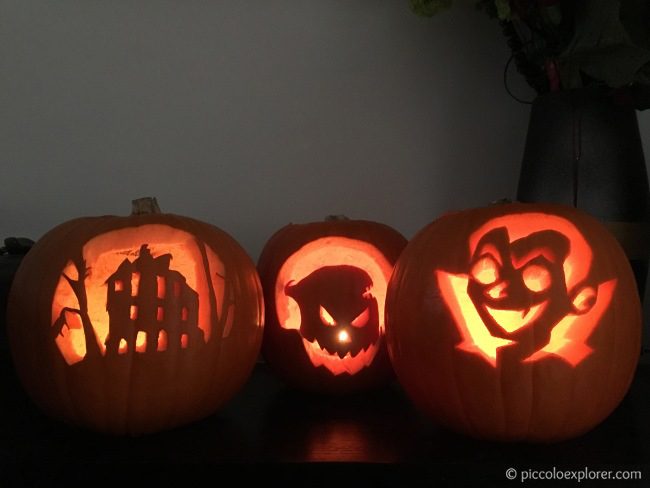 Holland Park is an old favorite – I used to come here all the time when we lived in the area and I do miss it! The park looked gorgeous with the leaves changing and starting to fall. 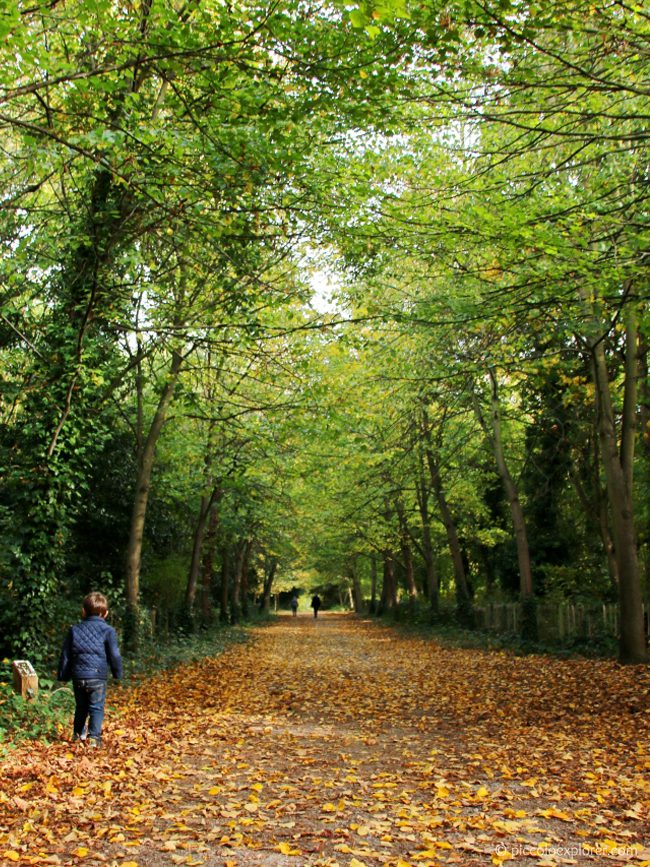 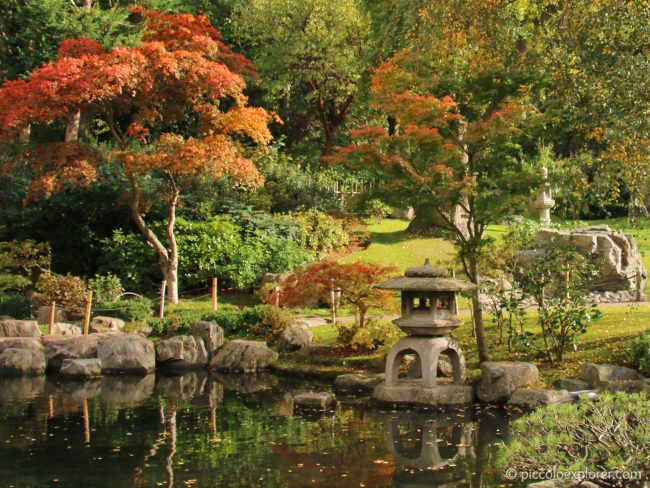 And the highlight was definitely this climbing ivy in an amazing rainbow of colors! 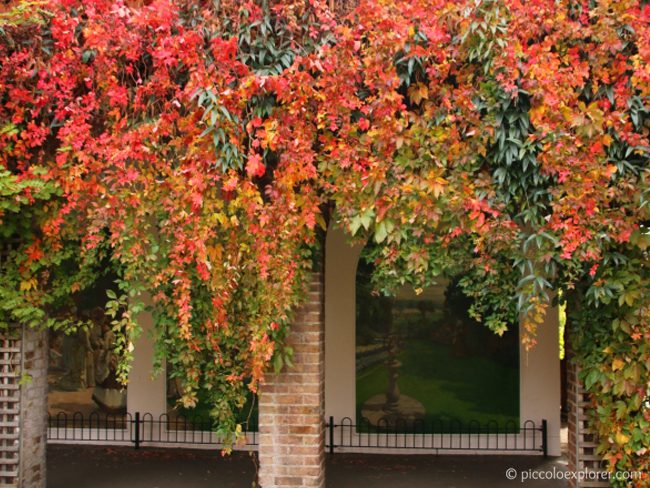 Our last day out of the month was at lovely Kew Gardens. I’ve written a post about our autumn visit at Kew Gardens last year, when we explored more of the gardens. This time around, we just enjoyed simply wandering around and jumping in the crunchy leaves before heading over to the playground. The autumn colours around London this year were truly amazing and beautiful to see well into November, too! 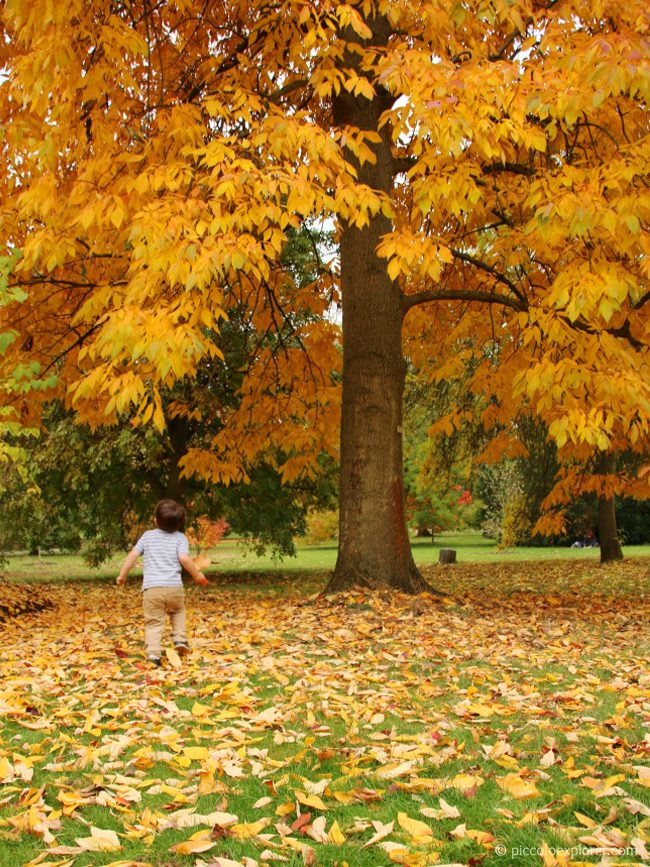 Counting up until the end of October, we’ve been on 56 days out and 7 overseas trips. The days out in October included day trips to Winkworth Arboretum and Scotney Castle, exploring more National Trust properties, enjoying the beautiful autumn foliage and pumpkin picking at Garsons Farm – making great progress on my Autumn Bucket List!

Coming Up in November

The first half of November was spent in San Diego to meet up with my side of the family – more to come in a Snapshots from San Diego post. Once back in London, and once we finally recovered from jet lag (which is absolutely terrible heading back from California), we set out to enjoy some of the festivities and activities going on around London in the run-up to Christmas. We made a stop at the London Transport Museum, saw some of the amazing Christmas lights around central London and went ice-skating at the Natural History Museum! More to come soon as I catch up on these London posts.

One thought on “October 2016 Around London”