A long haul journey with an active toddler can be at times a challenging experience, but planning in advance and knowing what to expect from an airline can help ease the stress of traveling with a young one. The comfort and service offered on an airline can also make all the difference to your journey. I’ll be sharing our experiences traveling with a toddler on various airlines, starting off with the most recent one flying with United Airlines, which was my first time flying with United (or Continental) after 15 years!

In July 2015, we went with United Airlines on four flights, traveling to Honolulu and back via San Francisco and Los Angeles. I flew solo with Little T on the first flight after an urgent work meeting in Houston came up for Mr G, but he was able to meet up with us in San Francisco for the connecting flight to Honolulu.

Our main criterion for our departing flight was to arrive in Honolulu as early as possible, with the shortest travel time, allowing us some time to settle into the hotel, have dinner (and mai-tais) and get a good night’s sleep. After searching on Orbitz (and double checking on websites like TravelSupermarket and Skyscanner), we found that United Airlines has the earliest scheduled arrival time in Honolulu of 6:30pm, while most other airlines arrive between 8pm and 11pm. For the return home, we chose a flight that would have us back in London by midday on Sunday so my husband had some time to settle in before going back to work on Monday. This would mean leaving Honolulu at 7:00 AM (and a 3:00 AM wake up call) which was rough but worth it to have one last Friday evening before leaving. 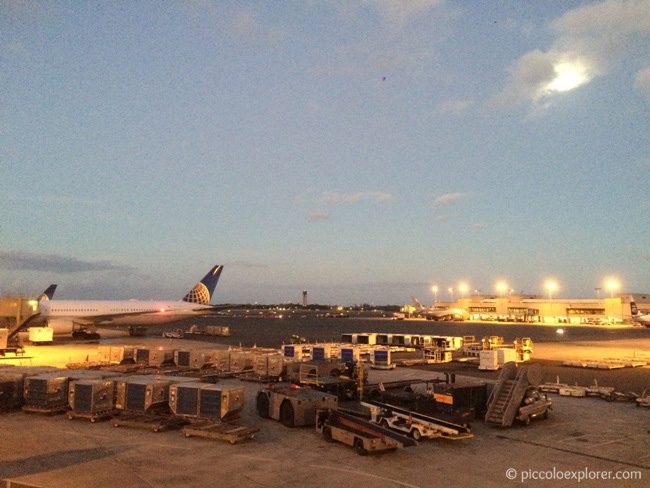 The best ticket prices I found were with booking directly through United’s website. When it came time to choosing our seats (which was asked before I completed the purchase), it helped to read tips on SeatGuru from other travelers about the airplane layout.  In addition to which seats to avoid, I learned from the tips that Economy Plus is definitely worth the upgrade for decent leg room.

The flight times heading to Honolulu were as follows;

Then, for our trip heading back to London;

When you travel through the United States, you still need to go through customs at the first city you land in and check your luggage in again for the connecting flight, so it is important to make sure you have plenty of time before your next flight for that process. The nearly three hours in San Francisco was a good amount of time to get through customs and have some time in the departure lounge to eat, freshen up and let Little T play before boarding the next flight.

United have self check-in kiosks that you use to scan your passport and print your boarding passes, itinerary and luggage tag(s). While they can be convenient and are straightforward to use, on this trip the kiosks didn’t really help make our check-in process any easier at the airports. At both Heathrow and Honolulu airports, I needed assistance but it was difficult to flag anyone down. We also had to first wait to use the check-in kiosk and then wait in another line to drop off the luggage, and I think I’d prefer to just do everything all at once.

What really helped during the first part of our journey were the airport play areas. At Heathrow Terminal 2, the soft play area was fantastic and kept Little T entertained for a good 20 minutes between the two sections – one for babies and toddlers shown below, and attached to it a climbing frame for 3 years and above (although safe for Little T to make his way through). The play area was supervised by two attendants by the entrance and overall it was a tidy, well-kept and well-designed play area. I would have liked to stay longer but Little T needed a nappy change and then it was soon time for us to head to the gate. 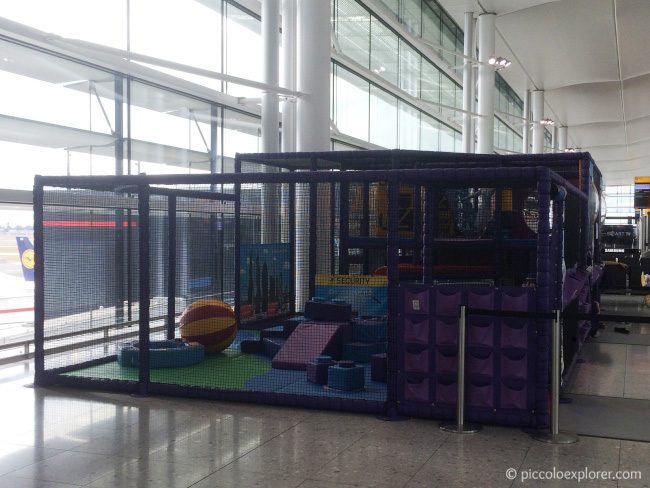 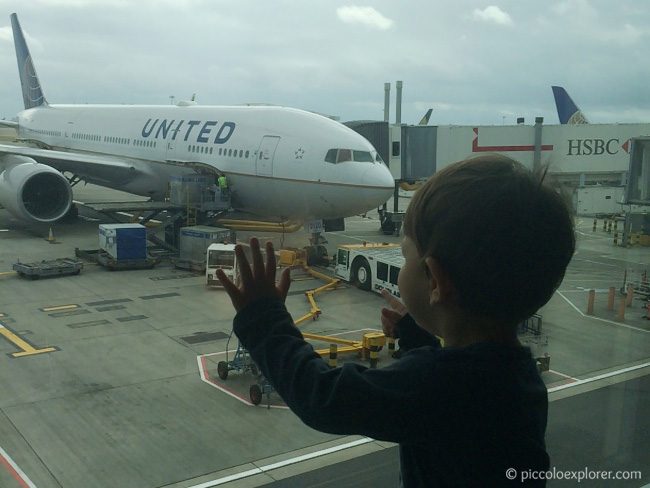 After the long flight from London, Little T also enjoyed blowing off steam at the play area by the United Airlines departure lounge at San Francisco. There was a tunnel for younger kids to crawl through and some interesting displays for older children, like the one shown behind the green tunnel below which showed how funnel clouds are created. SFO also have a helpful Traveling with Kids page on their website listing the family-friendly services, activities and restaurants available at the airport. 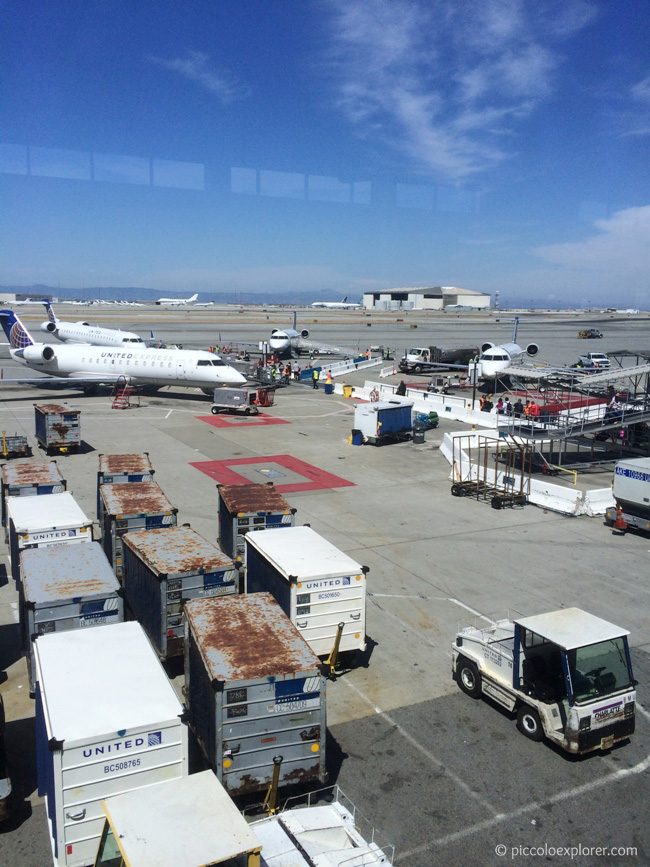 I purchased Economy Plus seating for our long haul flights, mainly for more leg room and to be seated near the front of the aircraft. I thought it was worth the upgrade for the extra legroom, especially when you have a baby or toddler on your lap and more stuff to keep in front of you. The seats, however, were pretty narrow and not very comfortable compared to other airlines.

The LHR – SFO flight was on a fairly dated Boeing 747 with overhead monitors playing a movie or TV show, but there was also the option to access their in-flight entertainment system on your smartphone or tablet with the United app or on your laptop using a web browser (Google Chrome is the only browser that doesn’t support the service), so I downloaded the United app to my Kindle when I received an email about this before our flight. 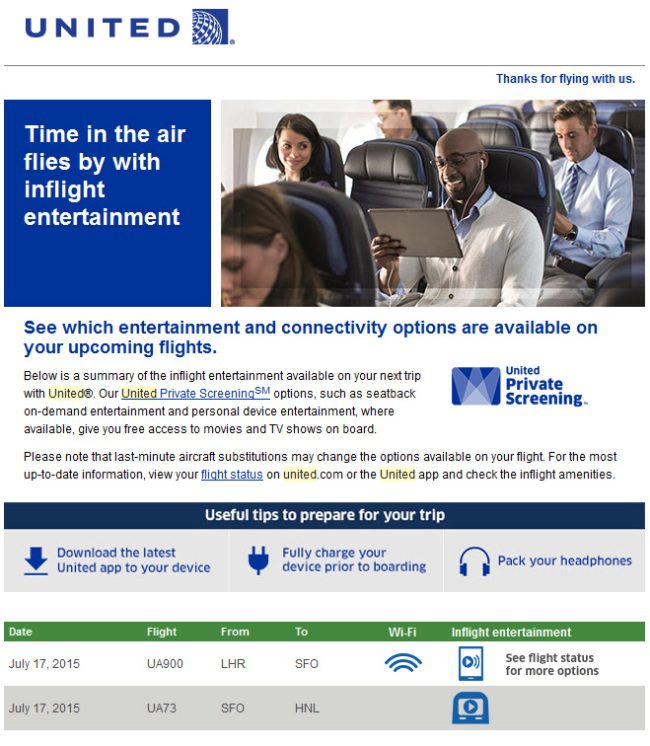 Traveling from LHR to SFO, I found that accessing the TV show and movie library on my Kindle was easy and straightforward. You can also view the flight map and when available, access the satellite-based Wi-Fi on your personal device, which costs about $16 – $20 (prices vary by flight).

For the rest of the flights, we had the seat-back entertainment, and the only flight I had an issue on was HNL to LAX. For this flight, a message came up asking for credit card payment not only to access the 100+ channels with DIRECTV, but also to have a look at the flight map. My screen wasn’t working properly so I couldn’t access it, and I tried using my Kindle, but when I opened the app, it just flashed constantly and wouldn’t load up.

For a helpful guide to what amenities to expect on your upcoming flight, visit United’s flight information page and enter your flight number and departure date.

A snack and a meal were served with refreshments during each long haul flight, with water handed out from time to time. Meals were only available for purchase on the domestic flights, and you can view the menu and decide whether or not to just pick something up at the airport before the flight – which is what we ended up doing.

We were served refreshments at the beginning of the flight and then lunch was served about three hours into the flight. I had the vegetable lasagne, which wasn’t good and also came with a dinner roll, barley salad and an ice cream. I think this flight was understaffed; it took about 45 minutes for our empty trays to be collected, and a flight attendant made an announcement asking passengers to stop dropping the trays off at the galley.

A couple of hours before landing, our snack was served, which was a sandwich with turkey deli meat and cheese. At one point I asked for whole milk for Little T, but United only serve 2% milk on their flights. I got a cup for him to try, but as expected, he wasn’t too pleased about it.

On this flight, we were given the snack first which was a packet of crackers and processed cheese spread.

For dinner, I ordered the chickpea vegetable curry with rice, which was OK and again came with a dinner roll and barley salad. 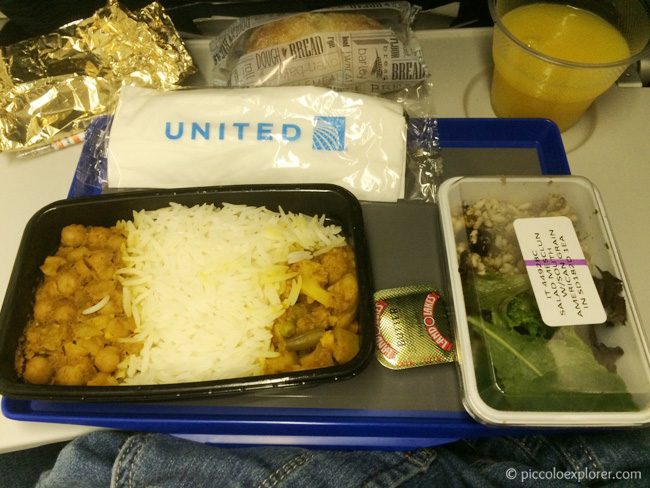 Little T was asleep during the dinner service, but when he woke up, a flight attendant offered to bring a meal for him to eat. We went with the chicken that came with vegetables and mashed potatoes, which my husband had for dinner earlier. (Sorry for the blurry photo) 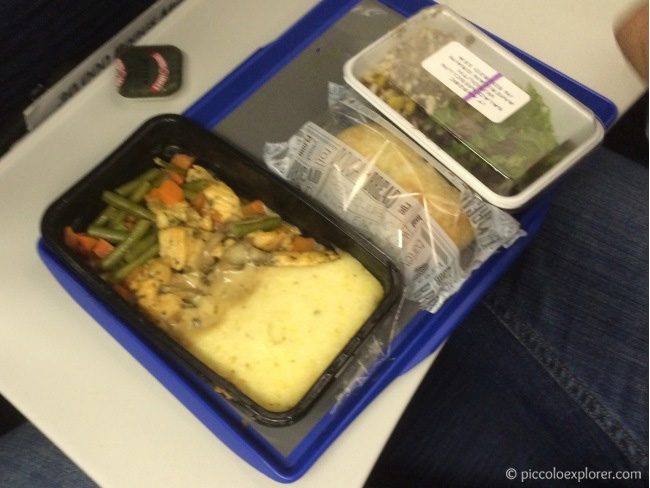 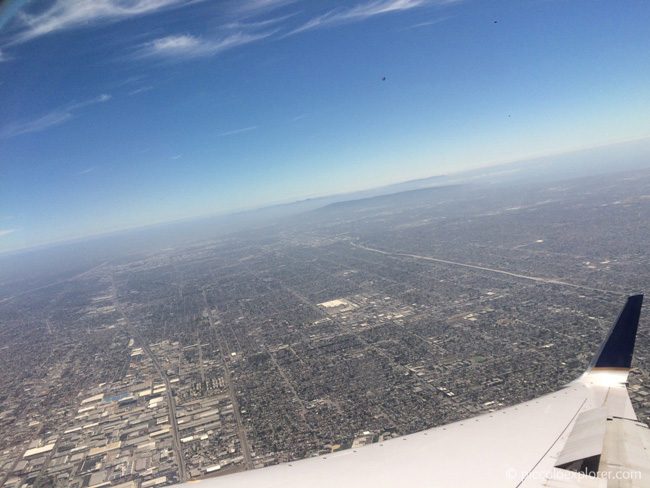 Other than some extra wait at the self-service kiosk, the check-in and boarding processes at the airports moved along smoothly. At the San Francisco airport, it was quick and easy to drop my luggage off at the transfer desk for our connecting flight. We were slightly delayed, only about 20 minutes, getting into Honolulu due to aircraft maintenance, and the rest of the flights arrived ahead of schedule. Each time, our stroller was returned pretty quickly to us on the jet bridge as we left the plane (or on the side curb at Honolulu).

On board, the service throughout our journey was fairly efficient, but not particularly warm, attentive or friendly. The meals and snacks were average. There weren’t any special kids’ packs that we’ve received with other airlines, although there was a good selection of Disney TV shows and movies in the entertainment library. Kids’ meals are available to order in advance for ages 2 to 12. There are a limited number of bassinets available on international flights and a couple of slightly larger restrooms with changing tables.

I found the seats to be pretty uncomfortable, especially on the dated 747 we took to San Francisco, although I was glad we could at least get Economy Plus for extra legroom on the long haul flights. United are in the process of rolling out their seat-back screens on all aircrafts, which I think will make it much easier for most people to access the TV shows and movies, but I wish they could keep it consistent across the flights. For the three flights that had seat-back entertainment, two were free of charge, while one required credit card payment, even to view the flight map.

Would we fly United again? I most likely will when traveling within the United States, but to be honest, for long haul travel, United would not be my first choice. I would prefer to fly with a more comfortable and accommodating airline, and there are several that offer a much better product and on board service for about the same price.

One thought on “Review: Flying United Airlines with Kids”