The first half of August was spent visiting my in-laws in Fano, Italy. I traveled solo with Little T and we lucked out with mostly sunny weather and great days at the beach. Back in the UK, we had a few days out including a day trip to the Cotswolds, a couple of stops at nearby Kew Gardens and a visit to central London for a walk along the BFG Dream Jar Trail.

Here’s what we were up to around London in August. For more updates, you can find us over on Instagram at @piccoloexplorer.

First of all, Hidcote Batrim, which is a village near Stratford-upon-Avon in the Cotswolds, is absolutely adorable. Google Maps sent me to a locked gate behind Hidcote Manor, so I had to drive around to get to the correct entrance and I wish I stopped for a moment to take photos of some of the sights we passed – picturesque shops, thatched cottages and weathered churches that look straight out of a movie. Our day trip to the Cotwolds was brief and I can’t wait to head back there with more time to explore the villages. 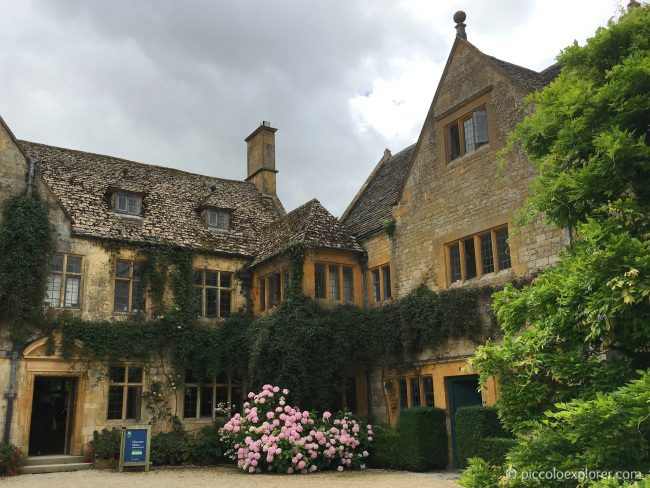 Hidcote Manor Garden, created by Lawrence Johnston and now part of the National Trust, features several outdoor “rooms”, separated by box hedges, rows of trees or stone walls. Each room has is own theme, with unique trees, plant and flowers carefully chosen by Mr. Johnston from around the world. 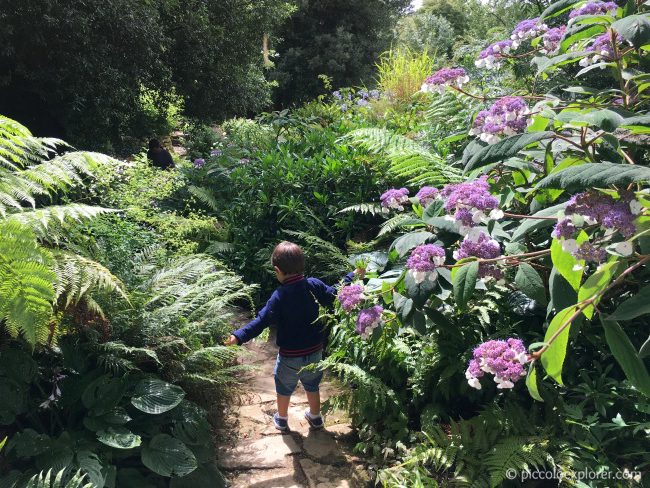 The garden opens up to a stunning view of the countryside. We had a great day there – more on Hidcote Manor Garden in a separate post. 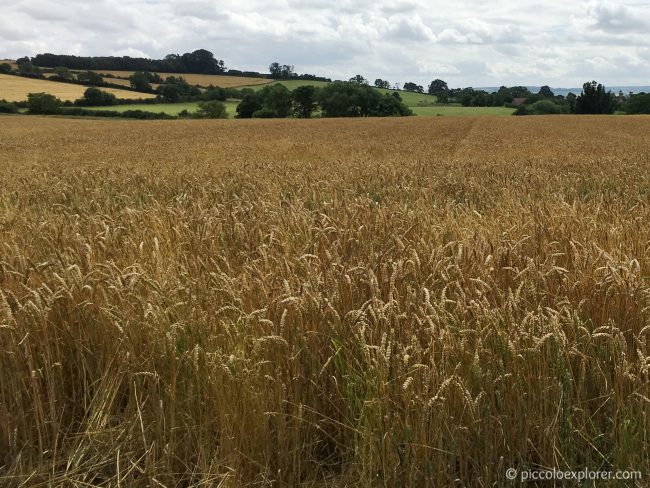 As mentioned in my July recap, I’ve joined Kew Gardens’s annual membership programme, Friends of Kew, and true to my word we were back to visit three times in August! First, on a stunning sunny day, admiring the bright colors along the Great Broad Walk borders. 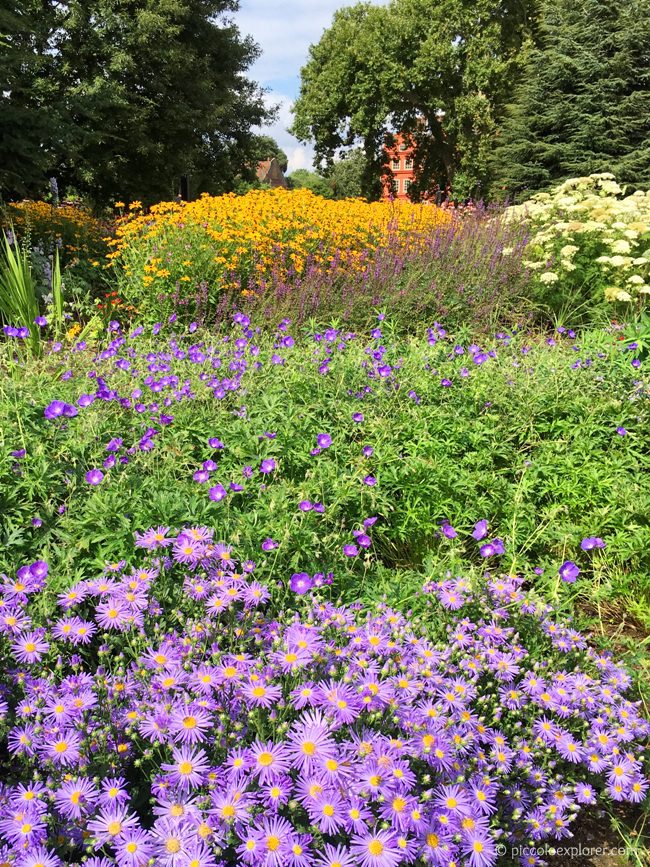 We also stopped by the Waterlily House, where you can see the amazing giant waterlilies. 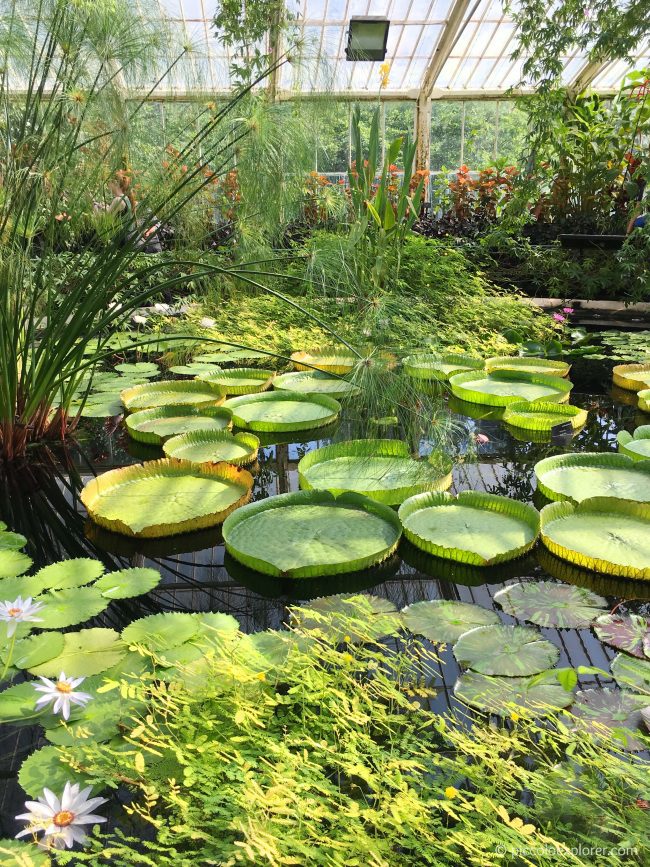 On another day, we wandered around the woodland area and along the way saw Queen Charlotte’s Cottage. The cottage is currently closed for winter but during part of the year, you can view the rustic cottage interiors, usually during the weekends. The cottage gardens are a popular spot for bluebell walks in spring. 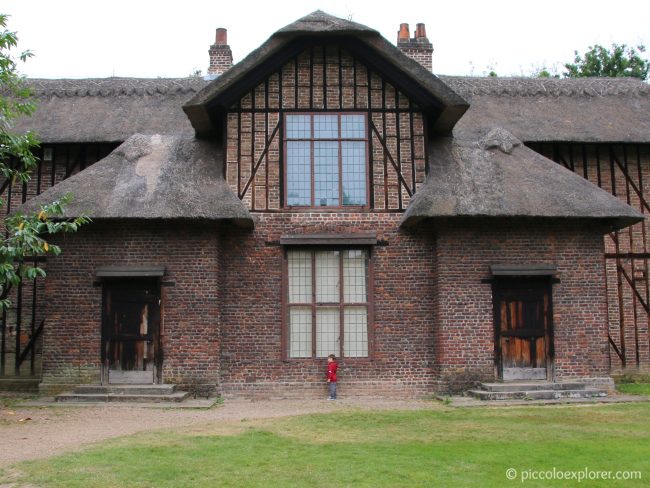 Later on in the month, we were back in the woodland area of Kew Gardens, having a look at the Redwood Grove which consists of a mix of coastal redwood and giant redwood planted around the 1860s. 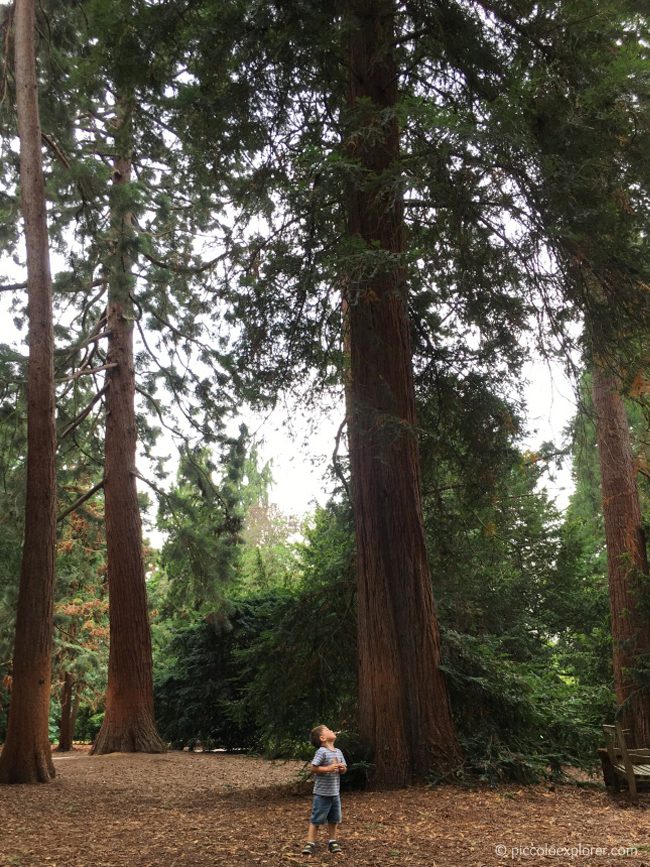 Near the Redwood Grove is this fantastic log trail. With all our visits to Kew Gardens over the past couple of years, this month was our first time really exploring the woodland area and I highly recommend it. There’s a human-sized badger sett next to the log trail that Little T had a blast running around in with the other kids. 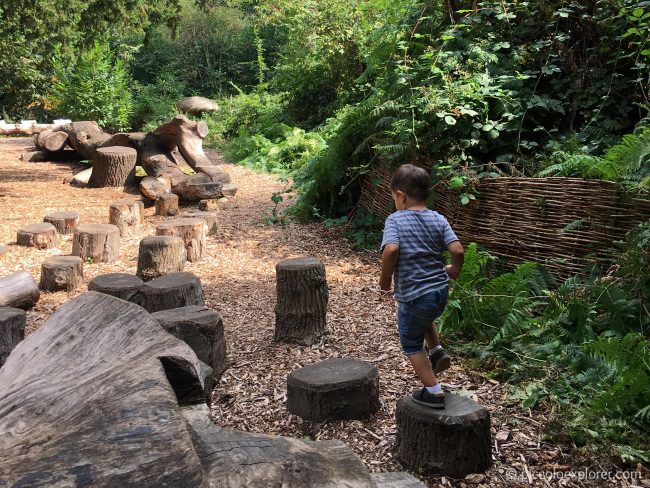 Over the summer, 50 dream jars were placed around London to celebrate Roald Dahl’s 100th birthday and the release of The BFG Movie. The giant six foot jars were designed based on the childhood dreams and aspirations of celebrities and top artists such as Steven Spielberg, Sophie Dahl, Dame Helen Mirren, and Sir Richard Branson. After being displayed on the trail for about nearly two months, the jars were auctioned in aid of Save the Children and Roald Dahl’s Marvellous Children’s Charity. Visit London have more photos of the BFG Dream Jars and further information of the initiative: http://www.visitlondon.com/bfg

Little T and I took the District Line to Victoria and headed to the nearby Grosvenor Gardens to spot the first jar of the day: “Tree of Dreams” by artist Jill Berelowitz. The tree was sculpted from bronze and features children reading, playing and dreaming. 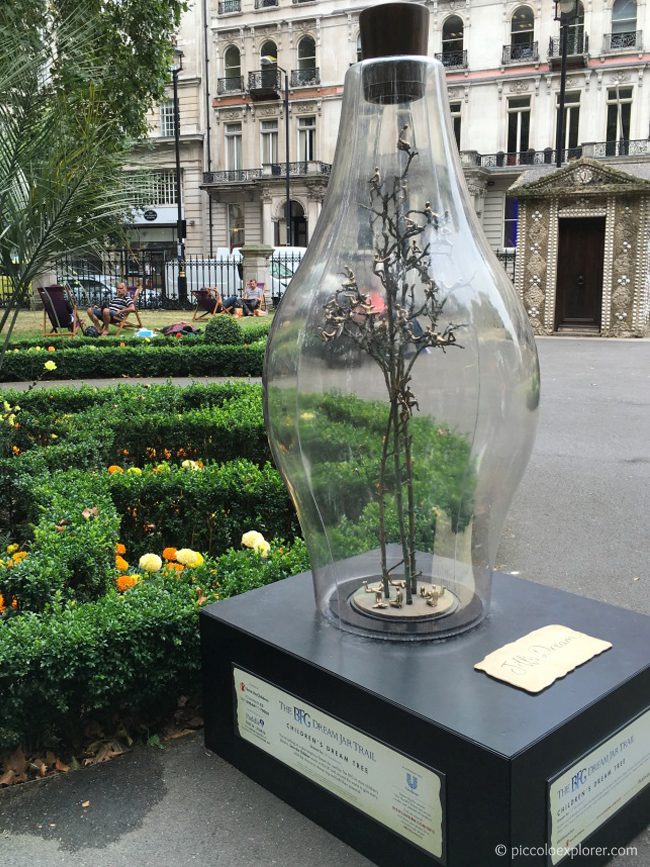 We walked along Buckingham Palace Road and found “Innocence” by HRH The Countess of Wessex, based on her dream to protect children from the many dangers they now face via the Internet. The sculpture was created by Irish artist, Ryan McElhinney. 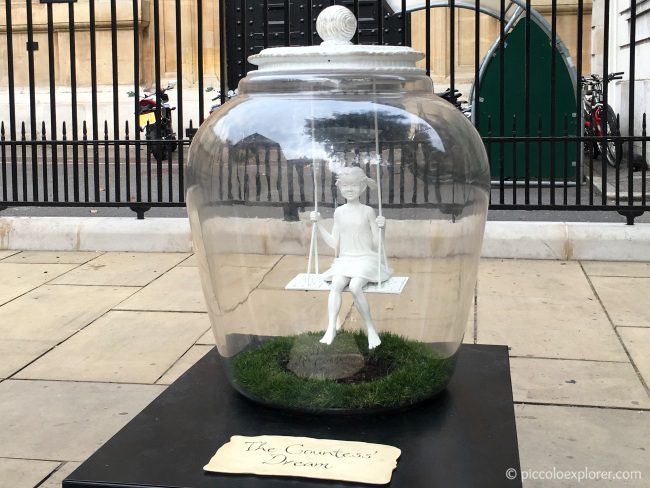 We carried on walking to St. James’s Park, where we took a lunch break at the playground, which has a great setup with a large sand pit, climbing areas and slides.

Then we took in the iconic views along the Blue Bridge, with a glimpse of the London Eye and Horse Guards parade on one side, and a view of Buckingham Palace on the other. 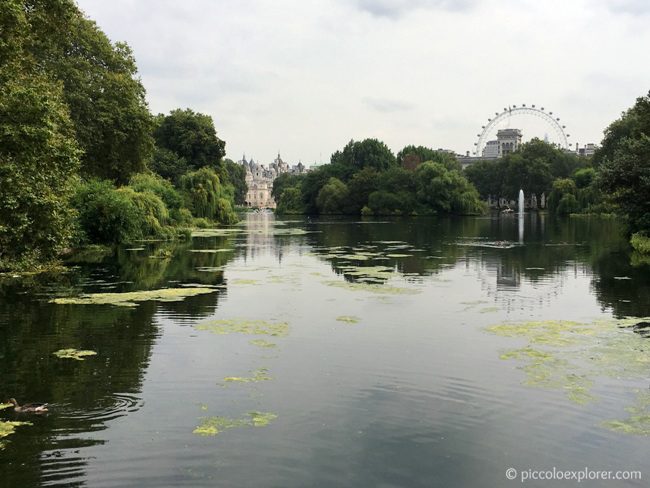 On the other side of the bridge we found the dream jar designed by HRH The Duchess of Cornwall and created by artist Michael Howells – her dream is to share the magic of books with the children of the world. 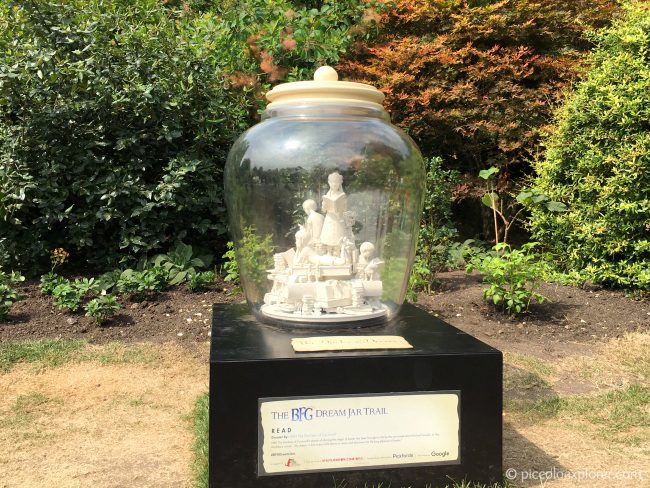 Lastly, we headed to Trafalgar Square where we found the Team GB’s dream jar. The trail was running during the Olympics in Rio, and each time an athlete earned a medal, it was represented in the jar! 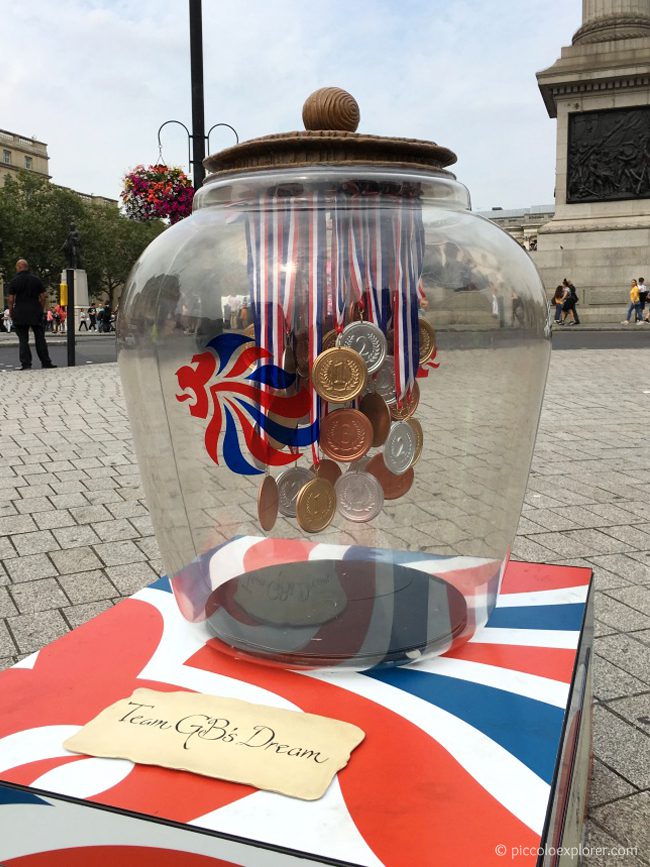 It was a great walk looking out for the jars and sightseeing around some of London’s famous landmarks. The views never get old! 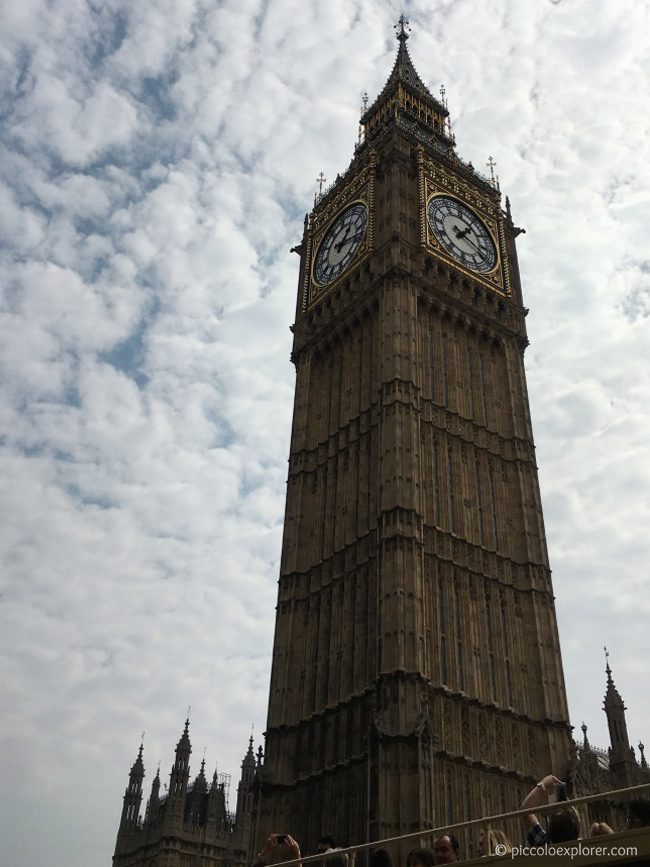 One afternoon, while Little T was at preschool, I headed over to Neasden in North West London to visit the renowned Neasden Hindu Temple, BAPS Shri Swaminarayan Mandir.

This was the first traditional Hindu stone temple built in Europe, made with 5000 tonnes of Italian and Indian marble and Bulgarian limestone (no steel) and built using ancient techniques based on Hindu scriptures. Over 1500 master craftsmen hand-carved the materials in India, then it took only 2 1/2 years for volunteers to assemble the temple in London. 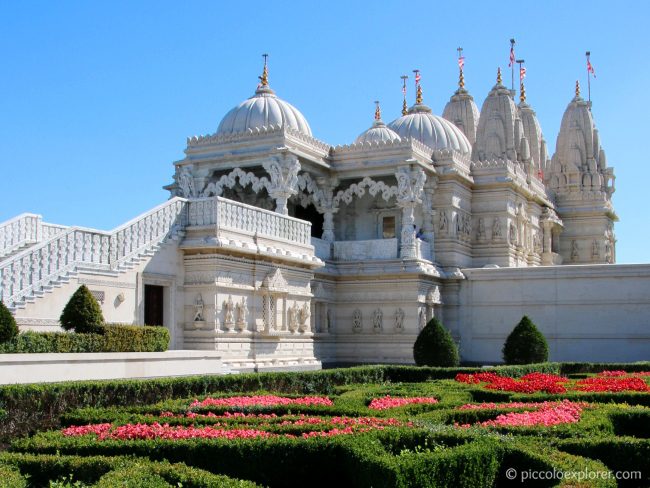 The architecture and intricate carvings throughout the temple are truly beautiful. I highly recommend visiting to explore the temple, experience a prayer ceremony and learn more about Hinduism at the exhibition.

No photography is allowed within the temple and you will be asked to check in bags and cameras at the kiosk in the parking lot. 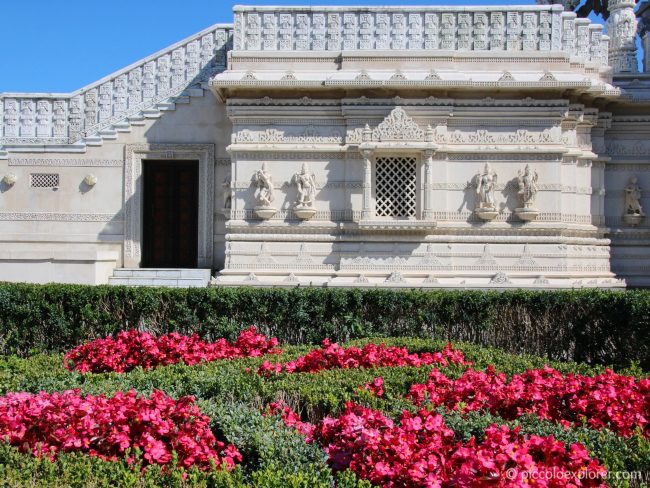 Over the bank holiday weekend we headed over to Whipsnade Zoo in Dunstable. We haven’t been there since last year and it was the first time bringing Mr. G too. We took the car around the Passage to Asia, saw the elephants and giraffes, had a picnic lunch by the Lookout Lodge overlooking the countryside then saw Little T’s favorite goats at the petting zoo. It was very gusty that day which wasn’t ideal for the picnic – napkins and cups flying around – but it was a good opportunity to fly the kite we brought along. 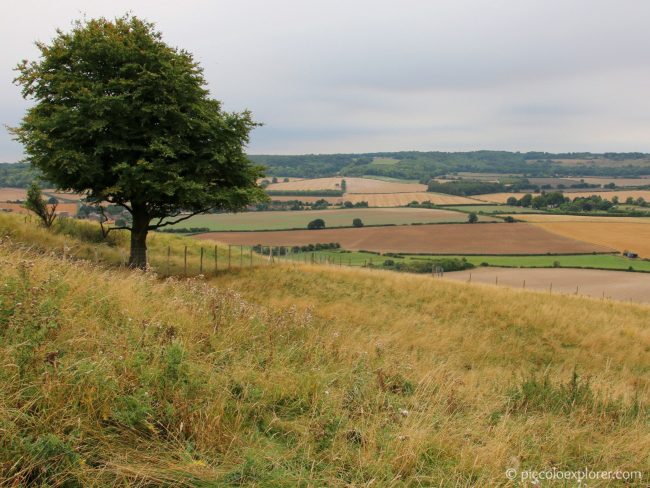 Counting up until the end of August, we’ve been on 40 days out and 7 overseas trips, including Fano in early August. The days out in August included visits to Hidcote Manor Garden in the Cotswolds and the ZSL Whipsnade Zoo in Dunstable, and a wander around Westminster along part of the BFG Dream Jar Trail.

Coming Up in September

September started off with some gorgeous summer weather – and we took full advantage of it with a last minute trip to the British seaside, at Camber Sands. We had a morning wandering around Holland Park, a day out at Garsons Farm picking fruit and vegetables and I took a workshop on street photography in Shoreditch. More photos coming up very soon as I get caught up on these round ups!